I took some time to refine some of my ideas from this post and illustrate them. This is specifically about the ideas for pre-battle deployment UI and management-feature additions during sieges and battles.

Siege UI and feature suggestion: Allow us to assign units directly to walls, towers, gatehouses and siege engines. This would bypass the sometimes clunky formations, which often don't fit correctly on walls, and avoid soldiers spending valuable time pathfinding and shuffling into their preferred positions atop the walls and towers after the battle already started.

Personally I'd prefer it if my siege engines were manned by low tier units which don't have much of an impact on the battle anyway. Recruits for example.

After selecting the Ballista to be placed atop the tower, the "+" icon below the Ballista icon would open a "Manage Troops" window similar to the one that is already in the game during raids on bandit hideouts. 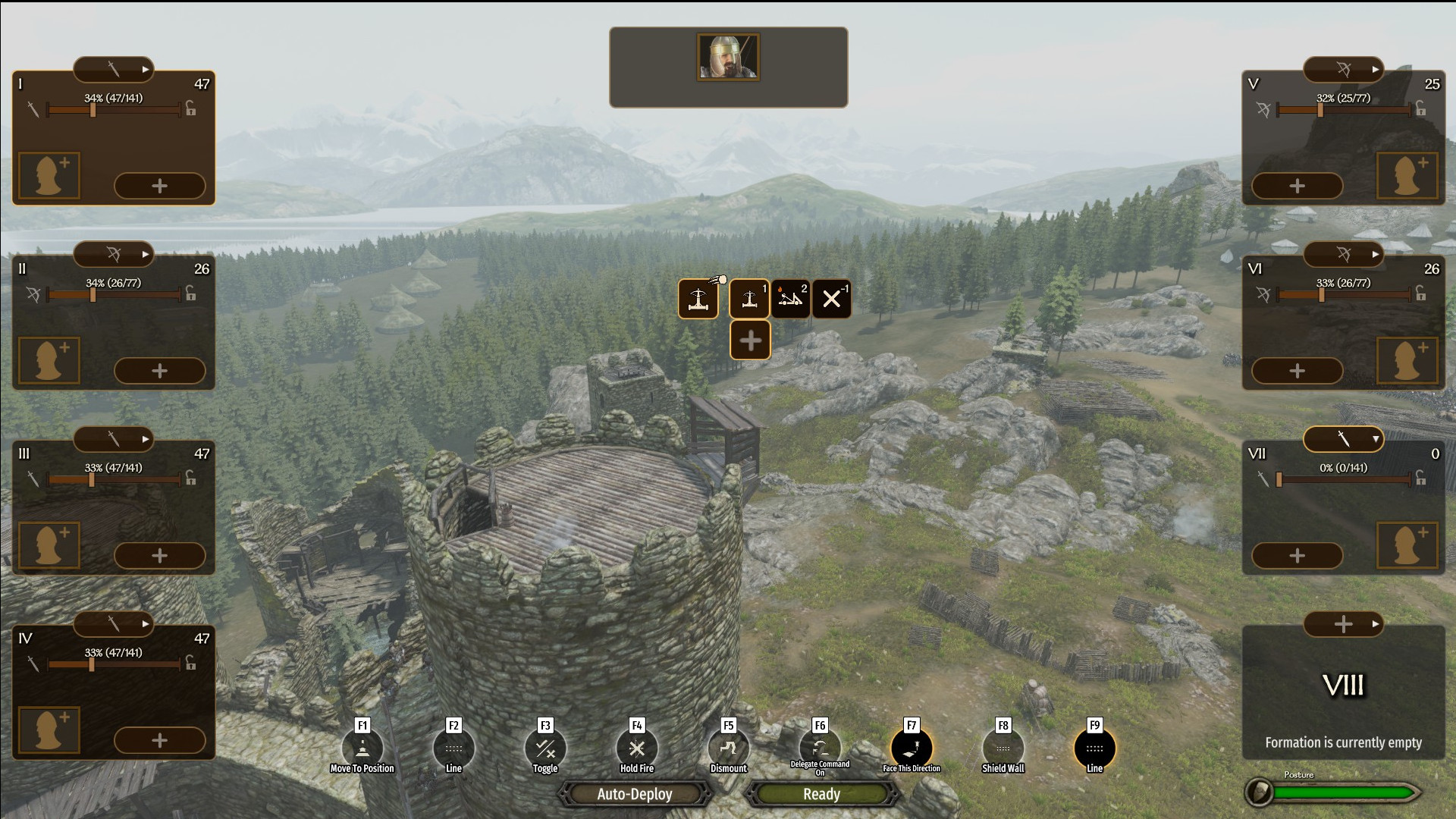 Herein we could choose the single recruit that is present in our party as the gunner/ crew for our Ballista. 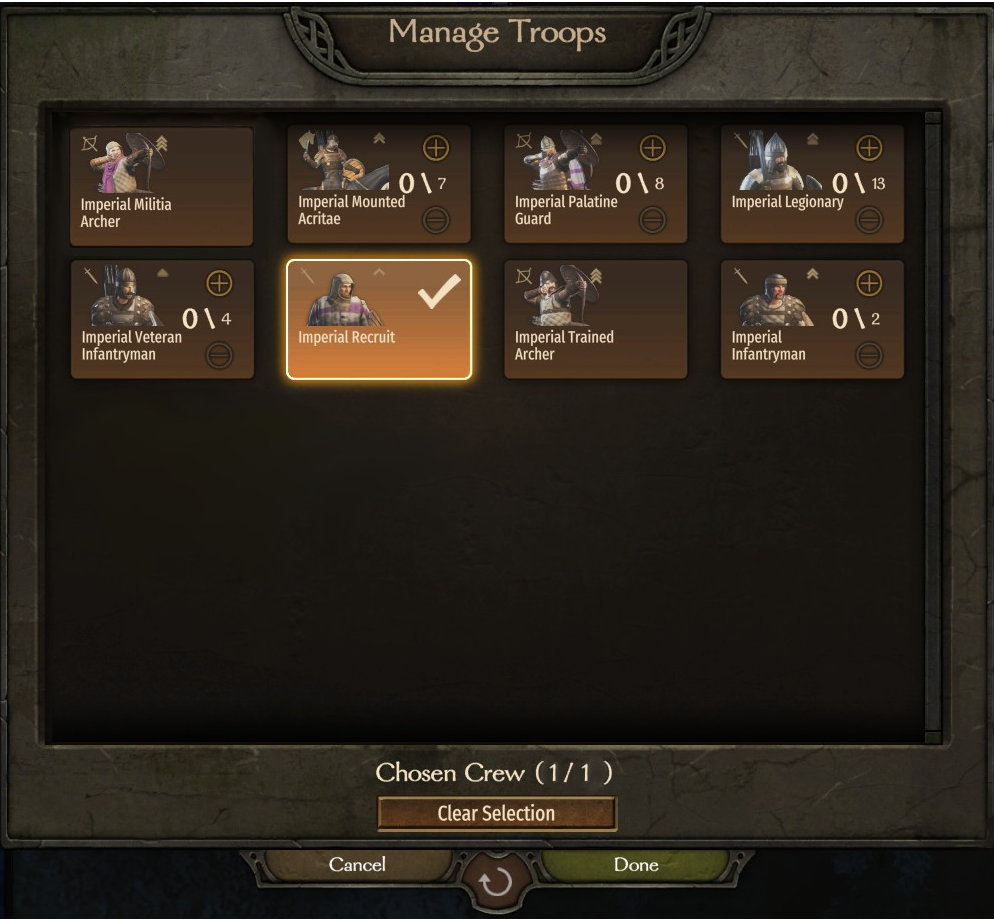 Defenses! Walls, towers and the gatehouse​

Assigning specific units like your veteran archers, javelin skirmishers or recruits (in case of structures with murderholes) to specific structures seems like a natural thing to do for any commander of a castle during a siege before the battle starts. Maybe you want your veteran archers on a tower so they can shoot on high range, for a long time and from a well protected position. Or you want your skirmishers to man the lower walls so they can rain javelins down onto the enemies who are charging and trying to raise a ladder. I imagine the UI for this could look something like this. 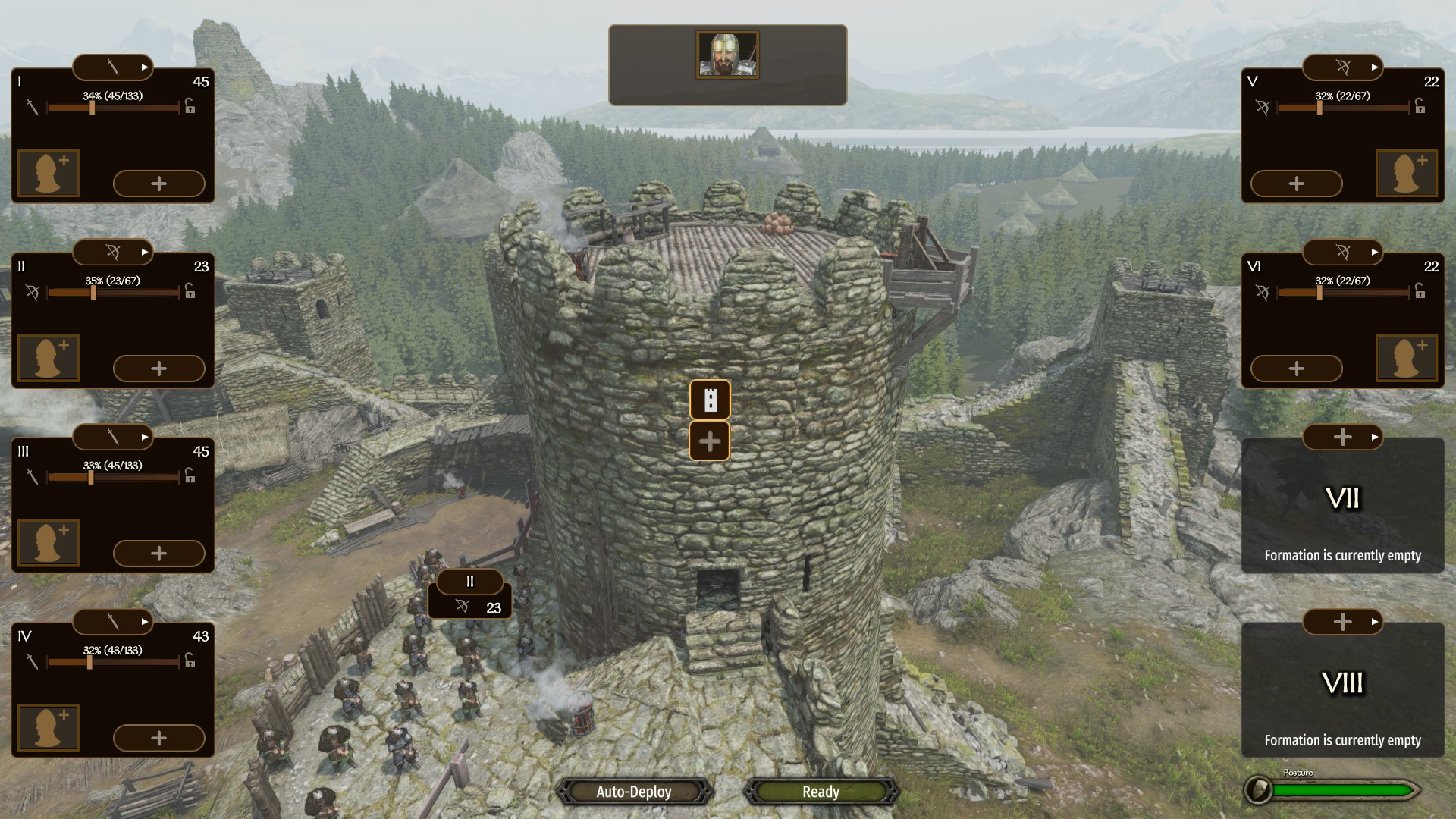 Once again, pressing the "+" icon (below the tower button) would open the assignment window within which we choose the defenders to be placed on their designated spots within and atop the tower. 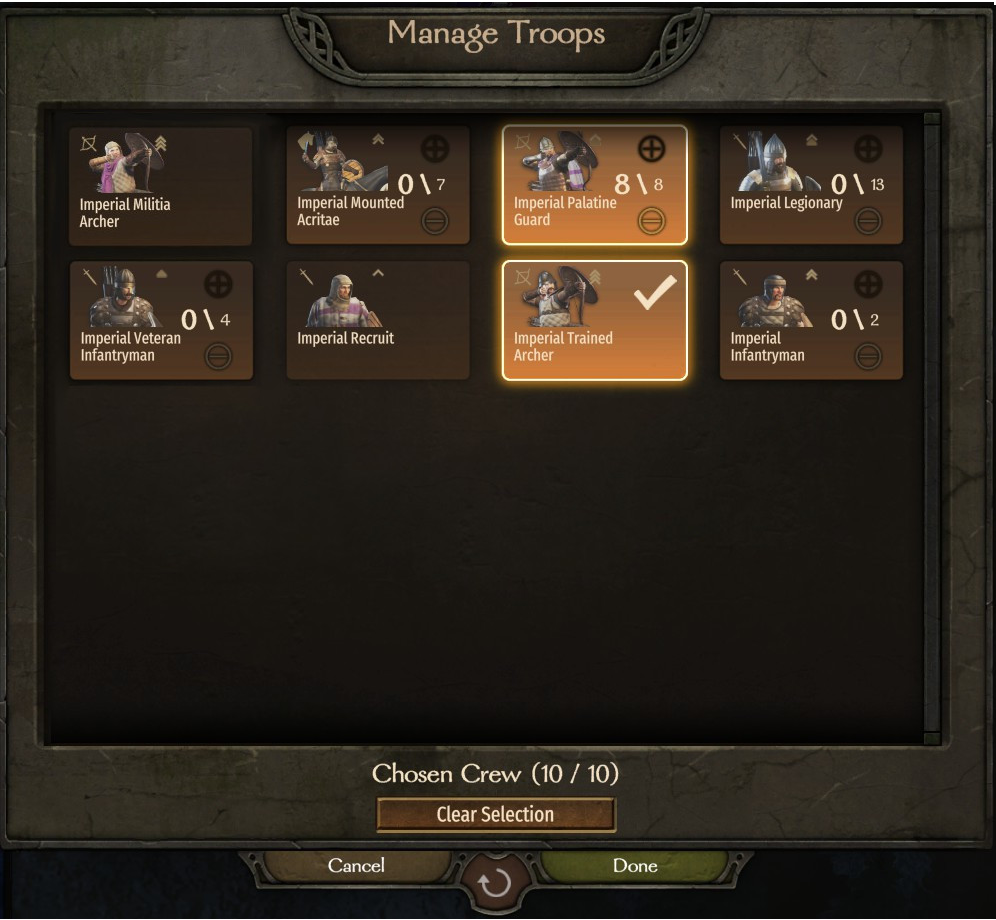 The same could be done for walls: 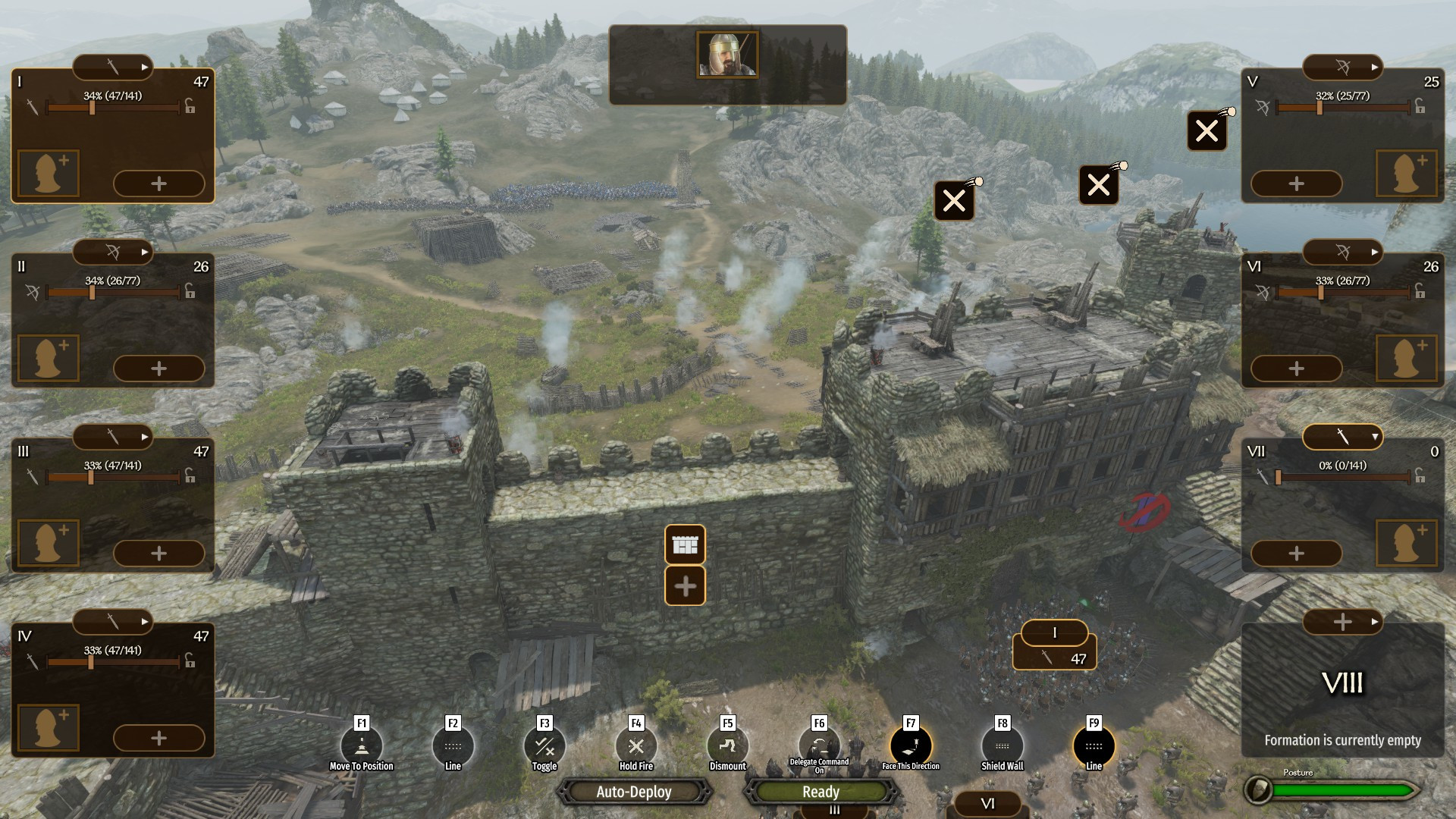 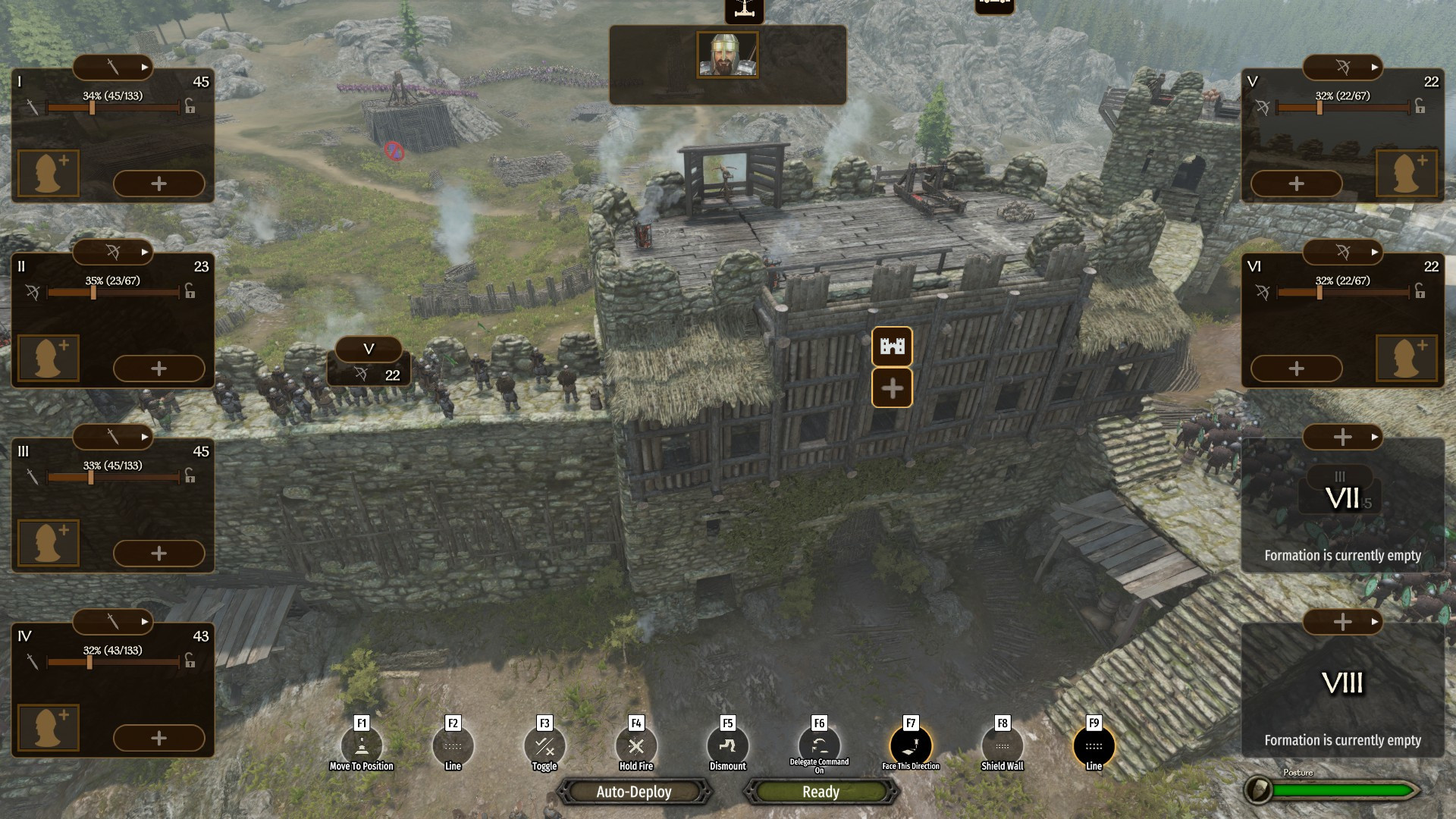 All of this serves the purpose of giving control of where specific units are placed to the player and prevent the army within the walls to run to the battlements after the battle started as if the besieging army caught them by suprise during a lunch break.


Furthermore, I'd like to suggest a different method for managing which specific units are placed within a formation during the pre-battle deployment phase. Preferences are a little ambigious currently and a different method, which in my mind is much simpler and easier to use, would be the following.

After pressing the "+" icon on the infantry formation which we want to edit, a customisation window similar to the one from the custom battle settings could open up. 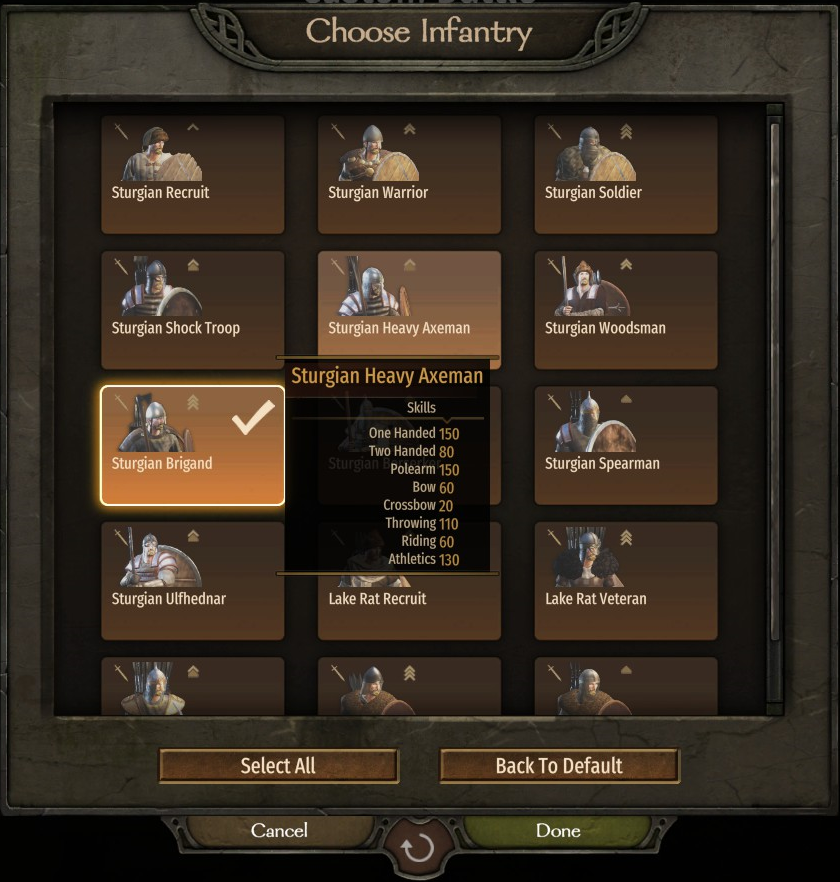 Within a window ,which could look somewhat like this, we could select the precise type of unit which we want to see included in the formation without having to set preferences, move sliders, double-check if the right units are within the formation and repeat this process for a while to get it right. Alternatively a similar window like the "Manage Troops" window could be utilised and adjusted to also fit the management needs of formations, see my original post for more thoughts on that. Imo these two windows offer great precision control over selecting specific unit types for formations and demonstrate what a window for managing formations in-depth during the pre-battle planning phase could make use of and look like. This system could also work in tandem with preferences and sliders, not necessarily replacing them completely.

Edit 27.06: I stumbled upon a recent video by the youtuber Jackie Fish who made a very, very similar suggestion for managing defenses during sieges in this video. I think the main difference is that he's suggesting to assign formations and the ability to set behaviours, while i approached it from the angle of assigning specific units through the "Manage Troops" window who would then be placed on the designated starting positions. Not going to lie, i'm surprised. He beat me to suggesting this by about 1 day (if you go by my first post outlining the vague idea on the 24th) and i only found out today. Therefore i want to give him credit and highly recommend you listen to his ideas for improvements to the game. It does make me glad that other players see the potential in this UI too and the need for being in complete control of siege defenses.

Edit 29.06: I took some time to illustrate what Jackie's suggestion could look like, the way i understood it atleast. Making use of the same interactive buttons as the siege engines, we could add the formation we want to place at a specific defensible location like this: 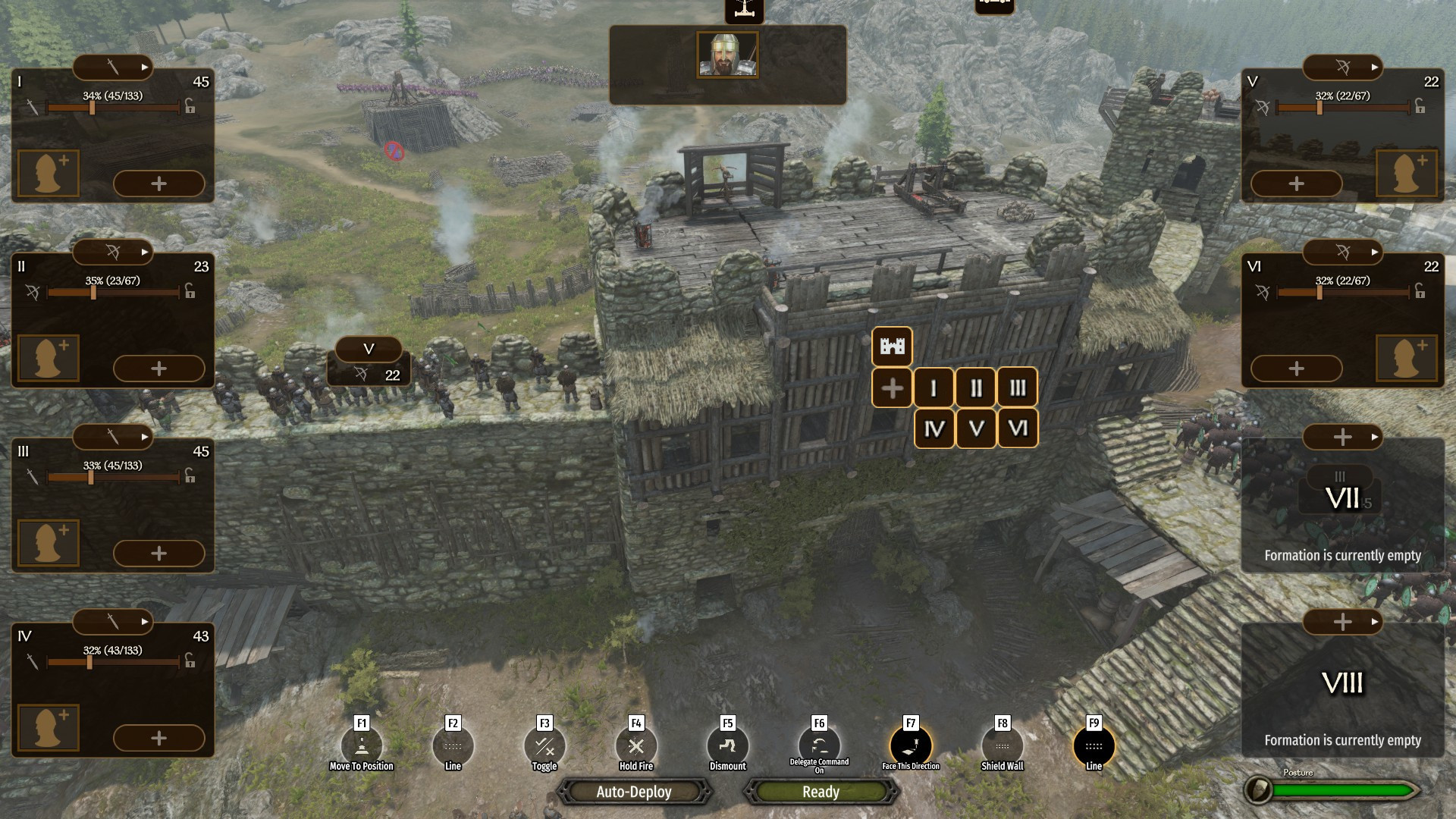 We could then set behaviours for the assigned formation in case of contact: 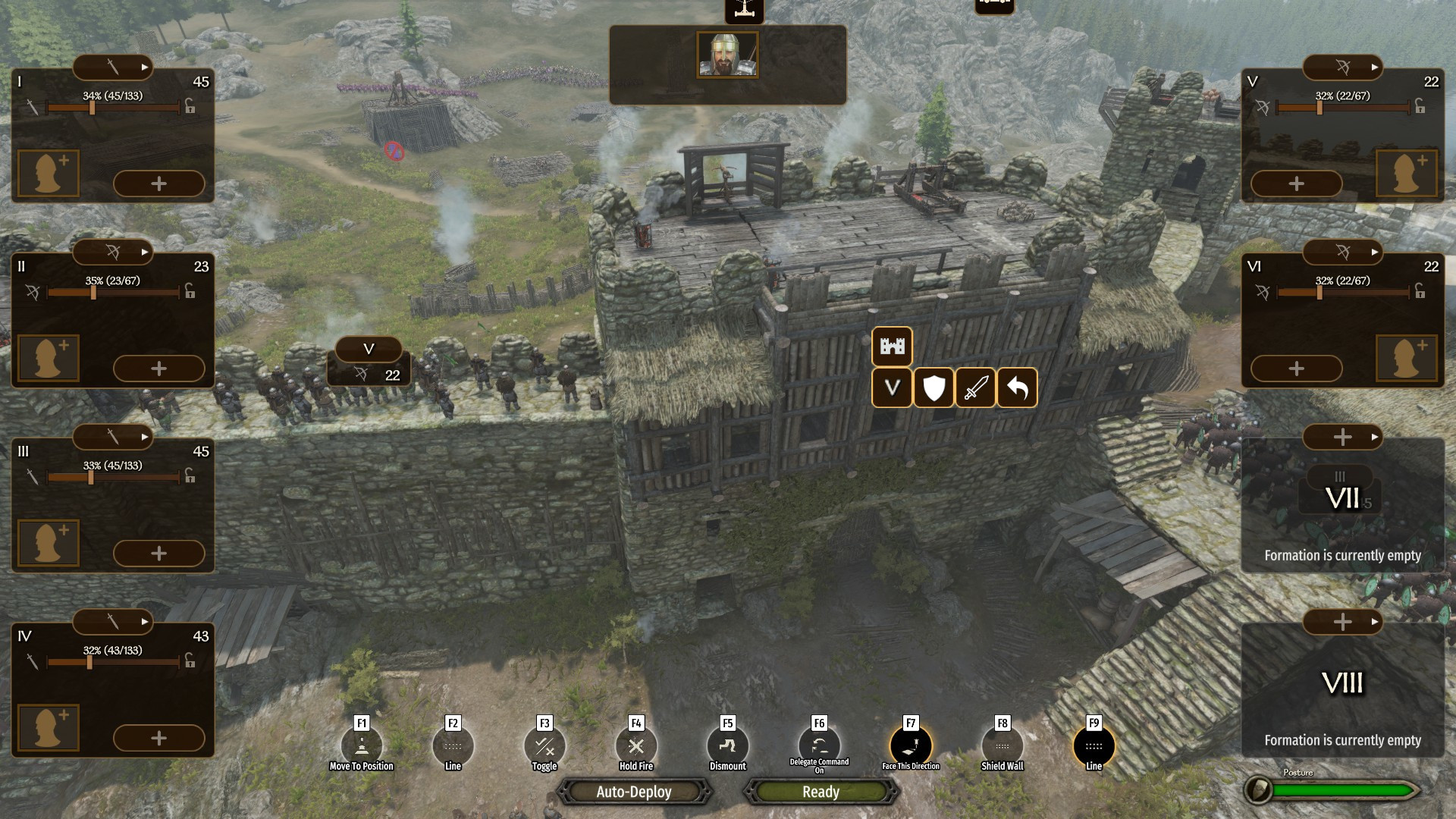 The icons being placeholders for "Defensive", "Aggressive" and "Fallback" - behaviours as suggested by Jackie.
Last edited: Jun 29, 2022
You must log in or register to reply here.

Tears of the Bannerlord