I never had any trouble to get to the flag as defender.
There were more issues on the attacker side. There is just one main entrance for the attackers, the detour over the walls takes a long time and can be blocked quite easy plus there was a minor defender spawnpoint inside the courtyard just a few meters away from the flag.

Well since the defender spawn have been moved backwards, it will be harder for them to cut off the main entrance. So it will also help with that

Good to see this one is on it's way back, there were some awesome areas where you'd end up having indoor fights and the brawls out front of the castle got pretty intense. I do remember it being quite hard for the attackers though if they couldn't break that first line of defense to A/B. Looking forward to playing it again.

First off thank you for the map changes, it was getting very annoying having to deal with G backcappers that would end the game early. But now there is another problem with the defender spawns. They are too close once it's just G left. Ever since the map change I haven't seen attackers win any rounds where the server is semi populated - full. Defenders have it way too easy now.

I've had the players on my team try several different strategies to overcome this, from coordinated charges thru the breach / gate, to having archers take the G wall and shoot down on the defenders. Or even a small squad try and hold the dark tower room behind G flag. The result is the same every time. We end up getting overwhelmed by the defenders, even if we have most of the team in the G courtyard.

A simple solution:
-Move attackers spawns to only be inside the castle once it's just G. Currently most of the team still spawns outside the walls, making it take forever to run back to G flag. Yesterday I got spawned on F, and that was super annoying trying to win the round.

Hey thank you. I intended for everyone to spawn inside, so its not by design that you spawn outside, with G contested. Ill look into it!
Last edited: Nov 3, 2020

NIN3 said:
Hey thank you. I intended for everyone to spawn inside, so its not by design that you spawn outside, with G captured. Ill look into it!
Click to expand...

I'm sure all the regulars on Siege will be happy to hear that! Thanks

i have played on the updated map for a while, but i still have the same issues as with the older version.

as defender half of the team still can be locked out at A and B and if the other half pays no attention, then you lose the round.
well, bad luck but is it possible to modify the door mechanics so that defenders can open doors from both sides but attackers only from the inside?

another thing is the new gap at the G flag. is it possible to add some kind of ramp at the scaffolding? i am a bit lazy and it bothers me a bit to take a detour to get back to the courtyard. 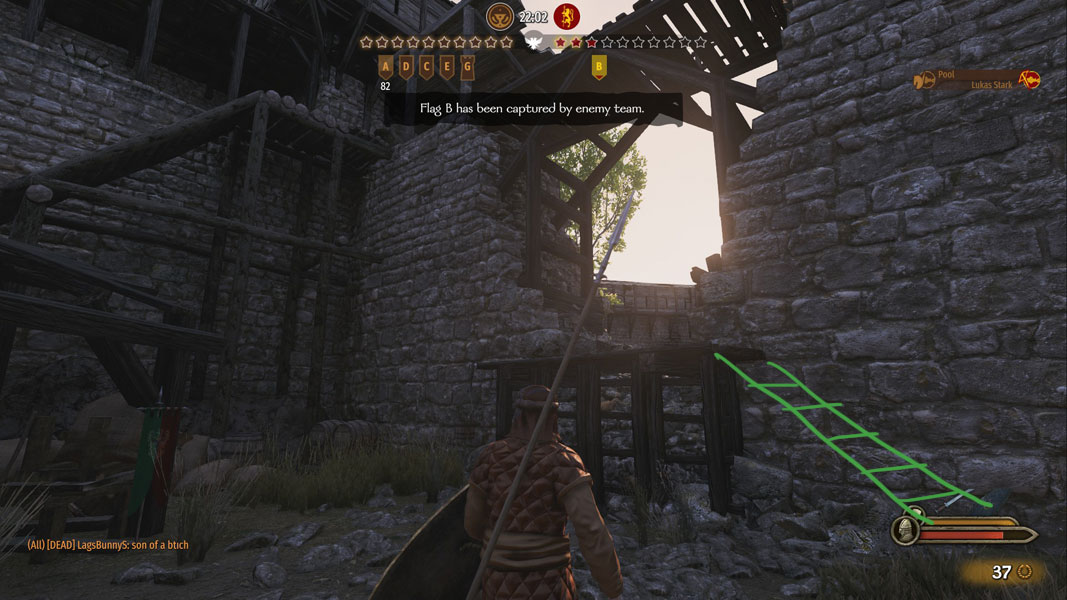 as attacker not much has changed except you have fewer options now.
you still have your three attack routes (A - main gate, B/C over the walls) but now B and C lead straight into defender spawnpoints. 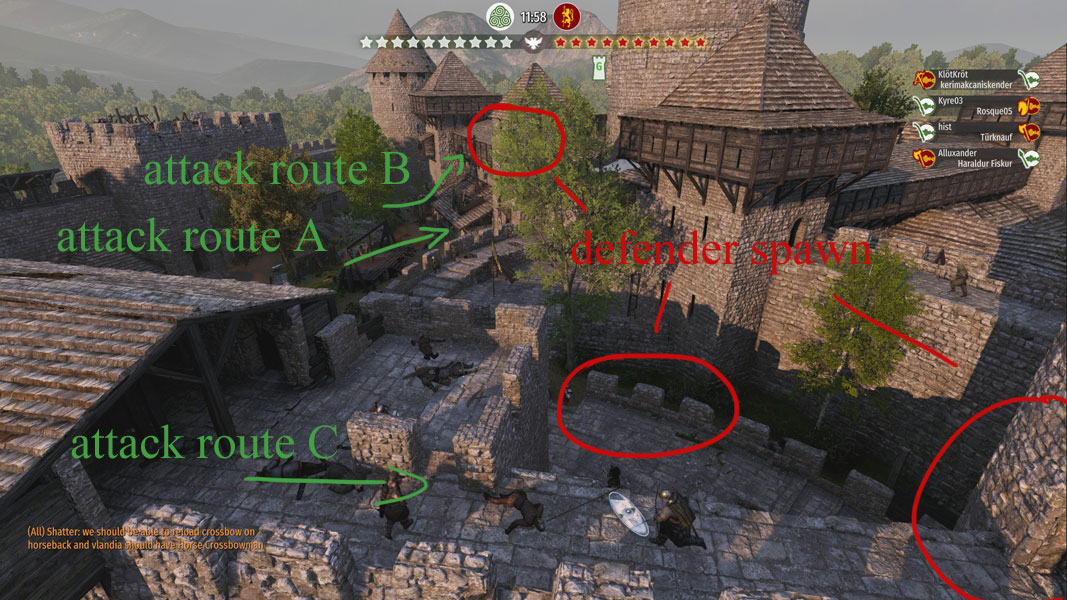 and there is still a spawnpoint directly at the G flag. 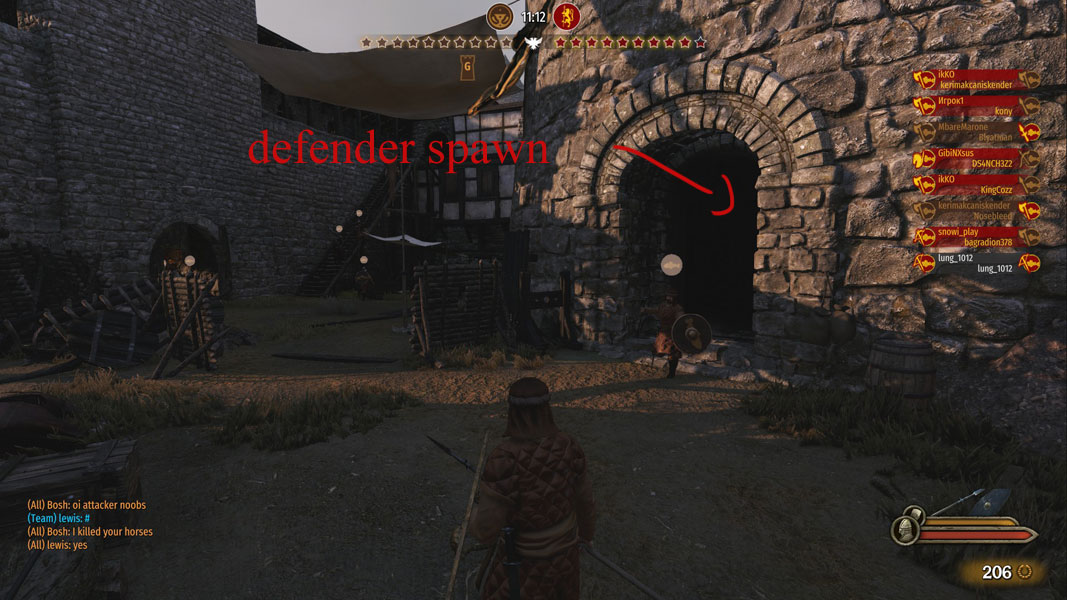 a solution could be to move the spawnpoints to the cavalry spawn so the defenders do not spawn directly near the flag. from there they can climb the tower to man the walls or go through the gap to defend the flag. 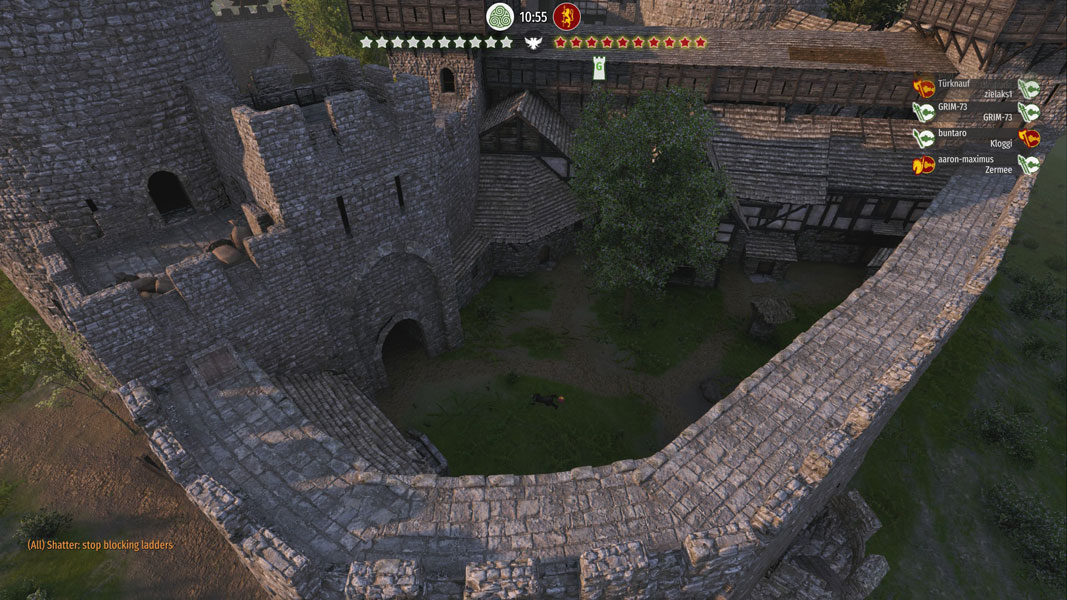 K M said:
and there is still a spawnpoint directly at the G flag
Click to expand...

Yes it's pretty frustrating as attackers to get the other team down to the final flag only for them to be allowed to spawn right on top of it.

I suggest when only G remains the defenders spawns get moved to another location so it's not as easy for them to defend G.

Siege equipment with the exception of the battering ram and siege tower feel completely useless on both sides. They literally exist as just a small little challenge on who can take out the opposing side's siege equipment first. The only objective I can see the right-side trebuchet being useful for is the small and lucky possibility of taking down the ballista (they finally made the wooden scaffold destructible so you have a slightly better chance of hitting the ballista), so good luck hitting that with the constant wind changes. I don't think anyone ever felt threatened by that ballista anyways compared to the ballista on the other siege maps.

To add on, what's the point of making the wooden bridge at G destructible if it makes no difference at all. I thought if by destroying the wooden bridge, then the attackers might actually have a chance because they can actually gain a foothold on the G tower. I was able to make it to the bridge with a stone only to find out that only the middle part of the bridge is destructible and that my efforts proved pointless. Defending reinforcements spawn on top nearby and just cross the broken bridge by walking on the sides of it or just straight up jumping over it with ease.

At the G sniper tower, you can actually hop off onto the unbroken roof to the left and use it to access off-limit areas. You just need to smash a stone wall with a stone or something first.

Hey thank you for your feedback!
I am looking into the issues and some other things right now. Let me give you a sneak peak of what will change. Keep in mind that (most of) those changes are like 2 patches away!

About the wooden bridge and spawns
I agree on what you brought up and adjusted the broken bridge. Now when you break it, more of the wooden platform will break off, making the jump to the other side a lot harder and riskier. Also I removed the planks on the side which made it walkable.

On top of that I moved some more spawn points in the tower behind it, so breaking it will affect defender reinforcements more now. Additionally in the next patch (so sooner than these changes) I adjusted the defender + attacker spawn positions for the last flag, to be more fair! About the “sniper tower” at flag "G"
I blocked off the merlons with barriers now. Let me know if its unitutive. I may need to make those melons indestructible then.

About siege engines
I adjusted the battering ram and siege tower speed (increased it by 20%). So hopefully the tower will gain some relevance.
Also for the next patch already, I adjusted the barrier in front of one of the attacker trebuchets: Personally I think it's ok that siege engines don't hold that high of a priority, you can actually attack the main and side gates with the attacker siege weapons, so they are not completely useless after they won their “duels”. Hopefully the addition of splitting shotgun like projectiles for mangonels in the near future will help with their relevance against archers on walls.

Physics Improvements
I spent a lot of time today going over different parts of the map trying to improve physics, so you get stuck less and also have your arrows blocked less often by physics that are bigger than the mesh of the object (at corners building for example).
Here is an example of a cart at the barrier at G: Actual physics (notice how its way wider than the wooden plank is): Other improvements
I added many more details to towers, buildings and such, to make them feel less empty. Also I colored the white flags finally

I liked playing as the french

@NIN3 Great news, those change would make this map fair for both sides and interesting to play. I always in favor for more breakable barriers so catapults and mangonels could become more relevants after the first few minutes. Good job.

The final G flag spawn is still skewed extremely heavily in favor of the defenders.

It's very difficult to win as attackers without backcapping.

It's very difficult to win as attackers without backcapping.
Click to expand...

I made adjustments to those spawns with the upcoming patch. So it will go to beta soon and then to live. I moved many of the defender spawns further back with it.

This happens at the B flag as well. I have spawned in the wooden tower at B several times, while the flag was held by the attackers.

The spawns are much more balanced now.

Hans 77 said:
The spawns are much more balanced now.

Happy to hear that. Thank you!
You must log in or register to reply here.