It guess the answer is yes. But I also guess it would be a lot of work for not much "profit" because there aren´t many VR users out there compared to the rest.

In my opinion it would be nice to have but has a very very low priority.

Cornelis said:
could bannerlord work in VR not that i'm really that interested i just noticed that the first person view was done really well and had a thought how it might play out
Click to expand...

Allmost every game COULD work with VR it would just be a total sh!t fest.

would be a lot of work as the left and right arms aren't free and the animations for attack and defend are pretty set. Don't know how physics based the damage calculations are in bannerlord.

But besides that it would already be cool to be on the battlefield with VR even if your characters interactions and hands movement don't work as they should.

By the way I sold my Rift S two days ago when I learned that Oculus TV isn't supported on rift S but only on Quest. Jumped of the sinking rift. shame on you facebook.
Last edited: Oct 13, 2020

I have to be honest, the thought of bannerlord in VR is rather compelling. I have played some VR games and found them quite enjoyable. I loved hacking fruit with my katana in fruit ninja! However, if you step outside the battling, now VR makes little sense. I don't really see a way to VR the campaign map, but I could habitualize putting the headset on just for battles. I don't have my own headset yet, but the rates are becoming more and more affordable, making it difficult to hold out. The Oculus Quest 2 is already available at a bargain rate of $299. The technology is getting cheaper and cheaper to make, and who knows what sales the holiday season might bring. If they opt for VR, I'm sure it will come some time after bannerlord's release from EA, and probably after the first DLC or two. Ports to console / VR I think is something TW will hold off on until they make the game highly stable and enjoyable on PC first. I believe I recall them saying no ports have been planned -at this time (during Gamescon).

It could possibly work with Mouse & Keyboard. Can't see it with normal VR though. You also have to remember your pc would have to render two displays and at a higher resolution than normal. With the amount of **** going on in Bannerlord, that's a lot of load for the pc to handle.

It would be nice if VR control was added without changing anything in BL. Two features are memorable in Bannerlord; 1) Online campaign map 2) Online and singles, VR controller supported matches. Cavalry encounters can be particularly interesting.

Tales of Glory seems to draw comparisons to a Mount and Blade VR experience.

I'm a "bit" late here, but I think you're looking for this game: 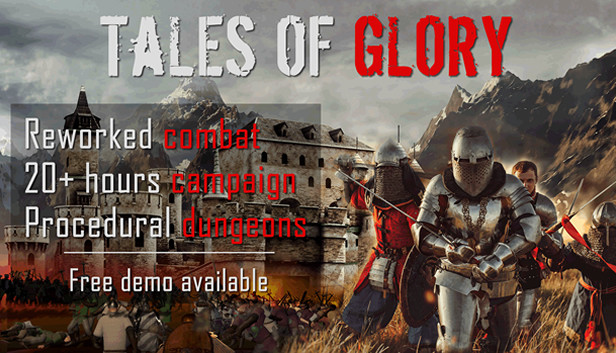 Tales Of Glory on Steam

Tales Of Glory is setting a new standard for medieval melee fights, bringing best of both worlds by combining large scale battles and full physics one vs many combat, everything packed into a 30+ hours sandbox campaign

ALSO: I should also mention TOG already has framework for MOD Support in place, full release and access to code coming (within the month?)

I would like for formally ask any Modders passing by the post, interested in VR and M&B modding alike, that there is a TON of potential for modding this game, and honestly the ONE developer can't do it alone -- we need your support to make it incredible!!

Details and ability to chat with Dev (extremely responsive) here on discord:

Very intriguing. Hope people will support this game. Now more interested in this VR clone than Bannerlord. Their discord is active and apparently THE dev is adding procedural caves to dungeon crawl mode.

Made by ONE dedicated dev, show this good man some love.

Ragratt said:
Very intriguing. Hope people will support this game. Now more interested in this VR clone than Bannerlord. Their discord is active and apparently THE dev is adding procedural caves to dungeon crawl mode.

Made by ONE dedicated dev, show this good man some love.
Click to expand...

Procedural dungeons are already out (beta) and literally within the week he's already added two new biome segments (caves and open-air ruins) as well as a new ruins hold-out map --- the Dev (Jay) is incredible honestly --- he hears feedback on Discord and acts on it almost immediately (and to think he's doing this for his two games simultaneously as well, and without either community feeling cheated in any way) ... never seen someone so efficient and proactive with their work! -- I think last weekend, I was workign with him on physic feedback and he blasted through I think 5 (solid) Beta updates in that one weekend lol

I honestly wish I had money to literally just give him a team of developers, more resources/SDK access to support his work and commitment! (most of his limits are in access to resources/tools - not a lack of will) ... hoping modding community here will pick up on it soon and play that roll to a degree

Its amazing. Does Jay sleep? The amount of improvement he is making to the game, in addition to seemingly always being on discord engaging w the community and taking feedback makes it two, maybe three full-time jobs. Very dedicated to the game.

Tales of Glory is not without its flaws, but dev is aware, responsive and constantly working to improve it.

Ragratt said:
Its amazing. Does Jay sleep? The amount of improvement he is making to the game, in addition to seemingly always being on discord engaging w the community and taking feedback makes it two, maybe three full-time jobs. Very dedicated to the game.

Tales of Glory is not without its flaws, but dev is aware, responsive and constantly working to improve it.
Click to expand...

I seriously don't think so lol ...I think this week is as a close as he gets, announced on Discord he's "OOH until Sunday so won't be any new Beta updates" (literally has to be drawn physically out of his home to cease working on updates -- not sure its a break or not, but he does deserve at least this one if it is haha)

So just to say it in light of the above... but looks like he just released Beta of (optional) unlockable Tiered Spells/Magic into the game and RNG loot-chest system into dungeons (with campaign XP, gold, secrets).

... aaaand seems Mods are Officially a go in ToG!!
You must log in or register to reply here.

Will they add a Multiplayer Campaign in Bannerlords?