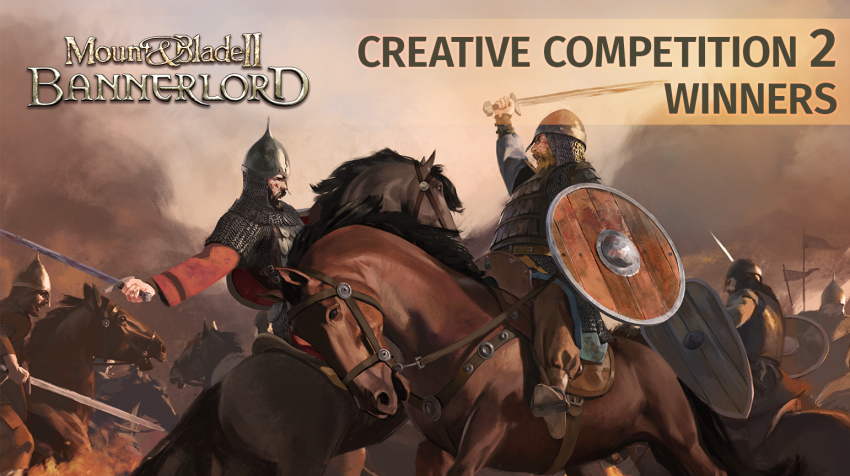 We were very excited back in April, when we announced the second iteration of the Bannerlord Creative Competition, with the first one bringing many modders and creators together to turn in their submissions.

We were amazed by the quality of creations and the variety of ideas brought to the table back then, and that hasn’t changed with the second iteration. We’re thrilled to report that many modders answered the call. After a thorough evaluation conducted by our developers, we’re now pleased to be sharing the winners of the Bannerlord Creative Competition 2!

It brought new challenges for the participants in the form of three contents - designing hideout scenes, producing royal melee weapon sets and making a comic set in the Dark Ages of Calradia.

Scene designers were invited to create a hideout, a sanctuary for thieving bandits who prey on the innocent that pass through the surrounding lands. The hideout mission is only reachable during the night - which is something the contest participants had to keep in mind while designing their submissions.

Our judges were attentive to the composition of the scene props, the quality of the ground texture and painting work, terrain realism, how well the scene plays out in a hideout mission and the use of new and fresh concepts while designing the look and setting of the scene.

Without further ado, let’s begin with the Scene Design Contest’s third place, achieved by Athaelas for their scene Abandoned Mine. 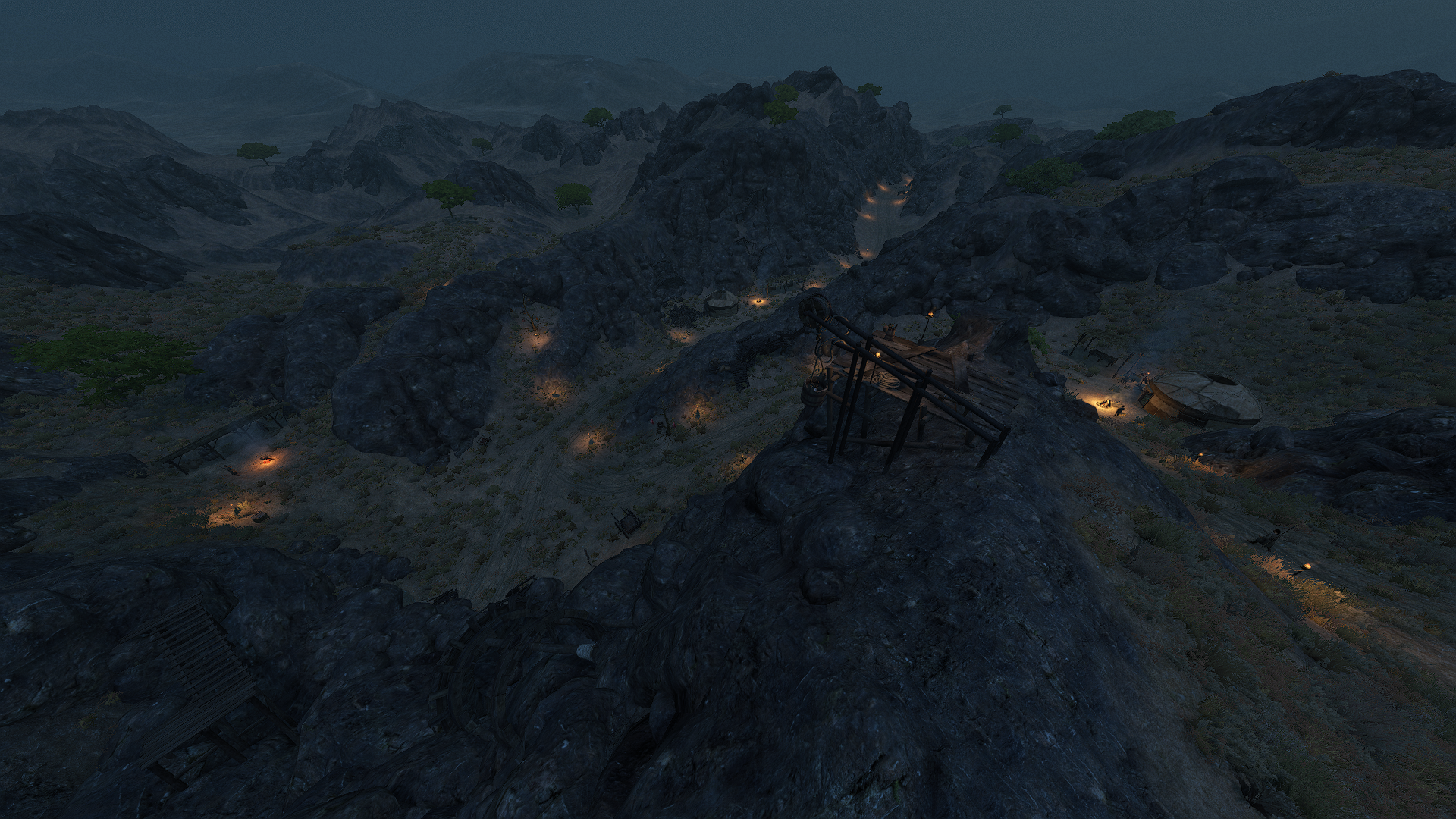 The name suits the scene very well! We feel that the linear layout combined with ample torches to guide the player creates for an effortless bandit cleaning of the hideout. The location of the player spawn sets a great tone for the rest of the scene. It keeps the player entertained through unique touches such as the remnants of the mine, a great crane location that overlooks the hideout and the tree full of pottery and bags - which it seems like was used for target practice by the Steppe Bandits.

Moving on, let’s take a look at the scene that won second place, the Battanian Burial Mound created by Klassix. Placed in the middle of a swamp, surrounded by deep forests, the player finds himself combating the formidable Forest Bandits. 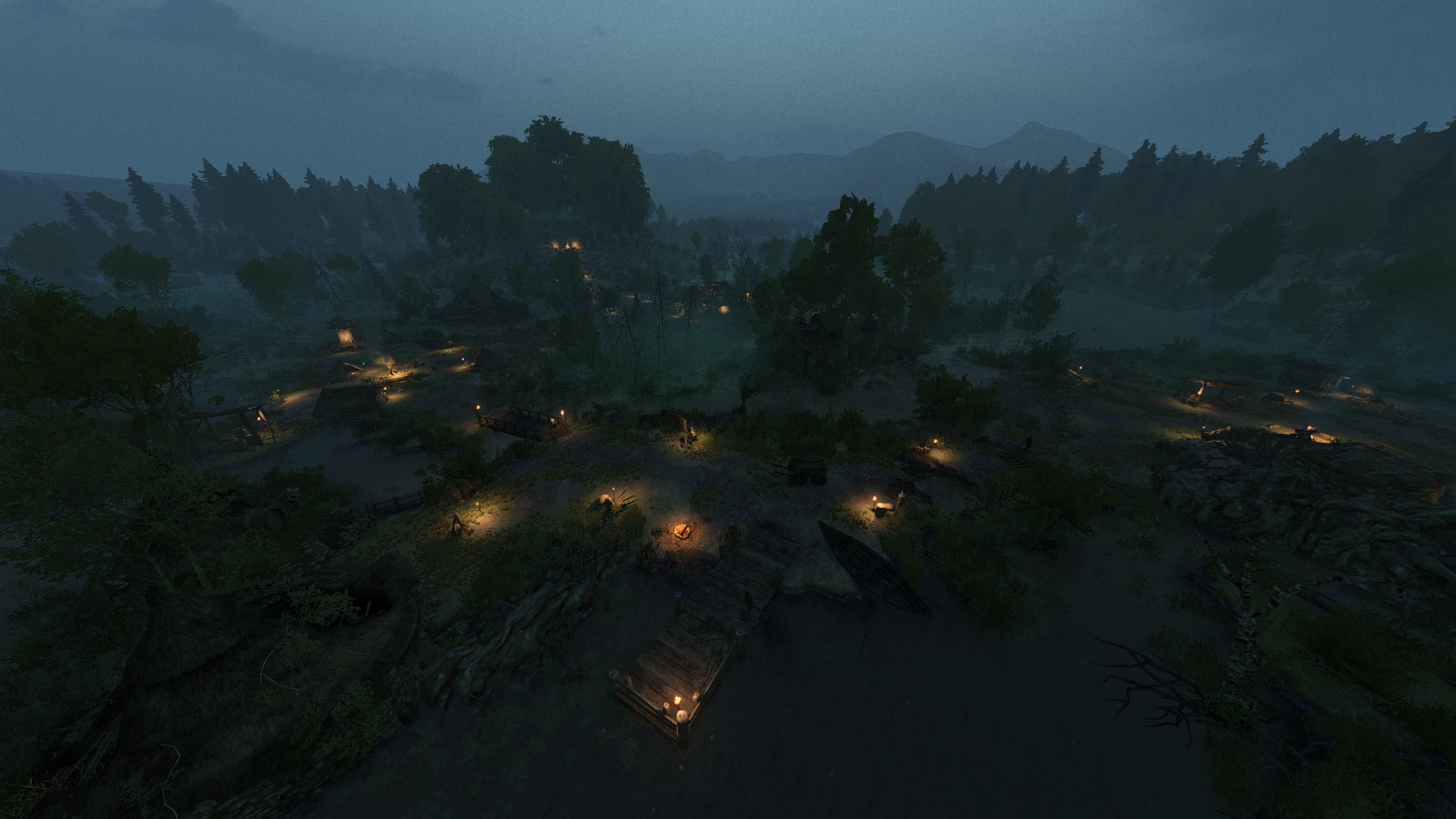 This scene captures the artistic style of Battania very well, making great use of the lights and fog to guide the player through the swamps. The great placement of invisible barriers prevent the player from wandering into unintended areas while keeping sufficient movement freedom. The AI troops can seamlessly move to every corner of the scene with the help of the well made navigation mesh.

The hideout boss fight unfolds in the tumb, which is very thoroughly detailed through a smart re-usage of assets in creative ways, not to mention the crack in the ceiling which fills the room with moonlight. The overall atmosphere of the scene feels fantastic, making this for a great second place!

And the winner’s cup goes to Levente and their scene Valeria Lookout! It’s most impressive when eying it for the first time, utilising a vertical layout to bring uniqueness to both the gameplay and visuals of the scene.

The impressive backdrop gives a sense of scale, with the homesteads and castle seen in the distance. The mission can be approached via two different paths without skipping any of the bandit locations and not having to backtrack which is quite impressive.

It was great to see that a lot of work went into the details and placement of assets, bringing the scene to life. For example, the manually created shooting star in the sky, the flying birds and the gaps above the caves.

Oh yeah, did we mention the cave system? After fighting your way through the narrow paths, you find yourself in an open cave full of Mountain Bandits that can’t wait to throw you over the ledge. And this is where we get to the final boss fight which just happens to have one of the best views of the lands in the background. An awesome location to wrap up the hideout!

You can check out all of the winners as well as other entries on our forums, where you can also download the scenes and enjoy them during your next playthrough.

Next up, we have the 3D art contest. Participants were invited to create a royal melee weapon set, worthy of being used in battle by the highest of nobles.

Each weapon in Bannerlord is composed of multiple crafting pieces which are spread across a number of categories, allowing for the creation of hundreds of thousands of different weapons. As such, their submission had to be implemented correctly, so that it fits with the existing crafting pieces and works with the crafting system. We evaluated each submission carefully and paid close attention to the visual appeal of the weapon set, the use of new and original concepts, the sensible usage of triangle counts, texture map sizes and how compatible the weapons are with the native crafting pieces and system.

Our judges had a very tough job picking the winners. The submitted weapon sets were nothing short of amazing and we do need to reiterate just how close these submissions came on the scoreboard. 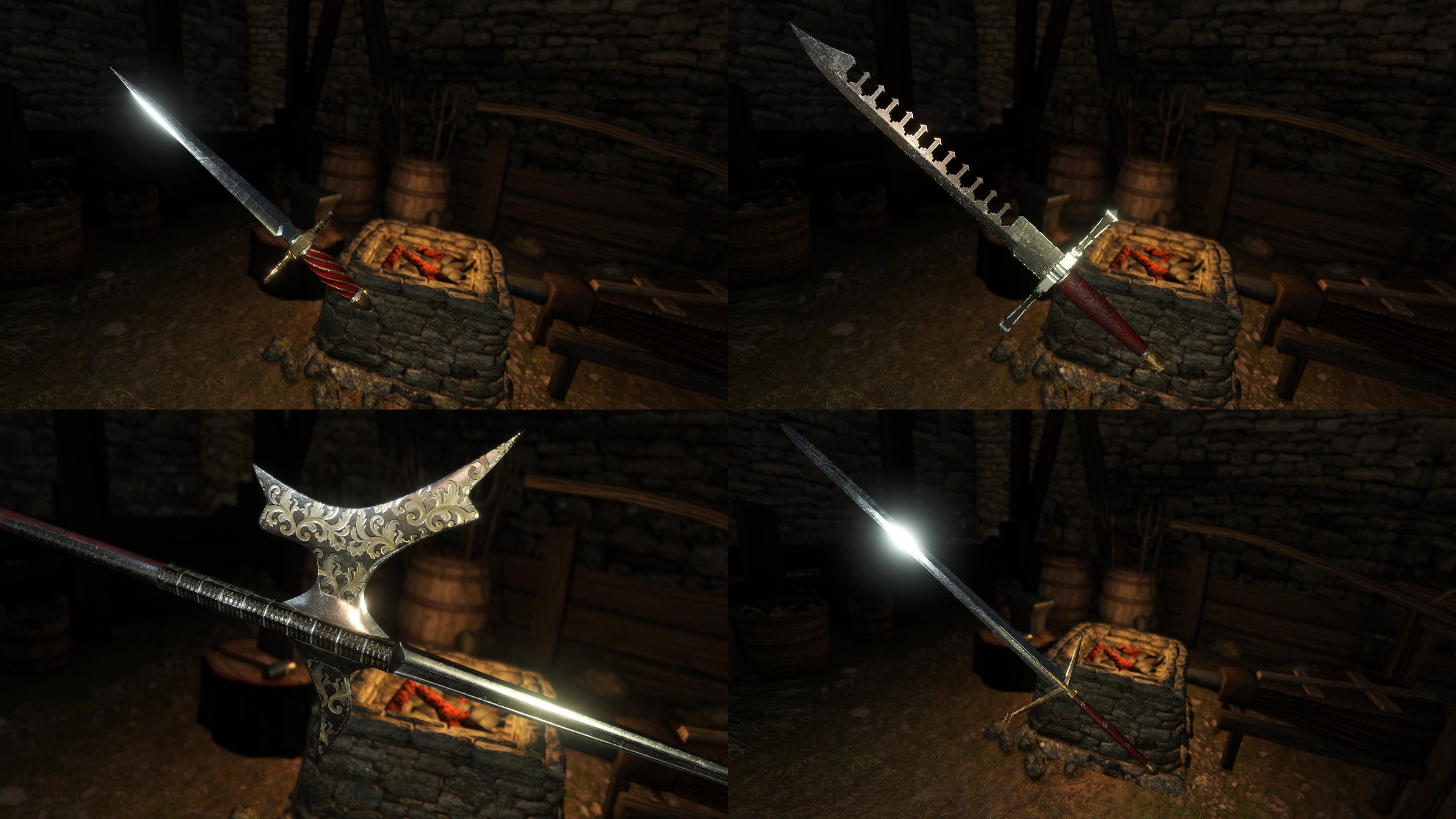 We feel that these weapons look elegant with well-made topology. The sword breaker, for example, looks mighty deadly! Some further improvements could be done to the textures but we couldn’t help to notice the details engraved on the polearm blade and the sword handles, all of which make this set suitable for a noble’s weaponry.

Moving on to second place, we have the Four Corners of Earth, made by Swordsman. The set consists of four two handed swords, each bringing its unique characteristics to the table. 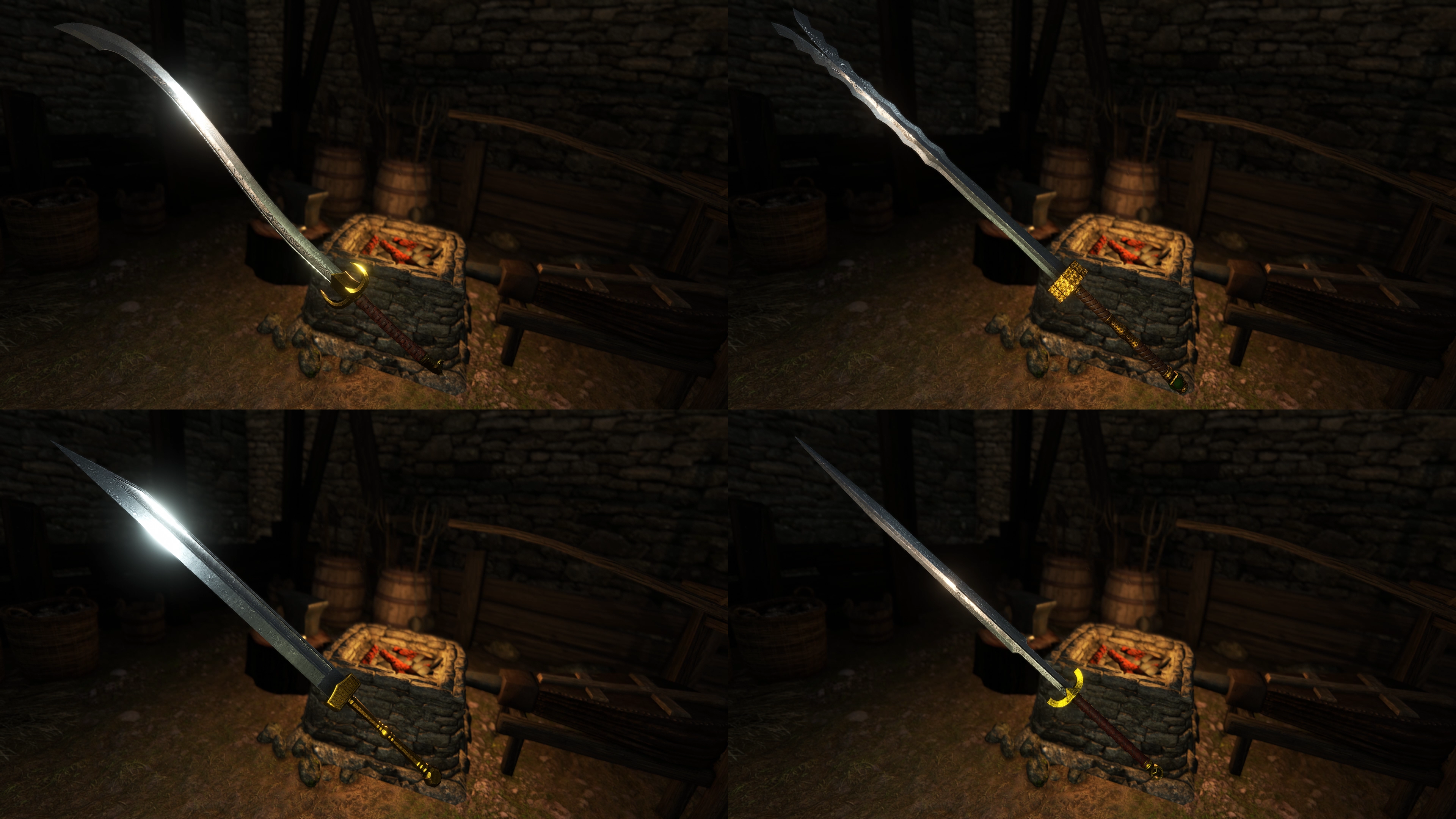 Four Corners of Earth by Swordsman

All of the swords are connected by one common theme, the pattern welded steel used for the sword blades - and yet, they all look very much different. The flowing specular changes on the surface of the blades look especially satisfying.

The submission as a whole is further improved by the original holsters used for the specific blades, utilizing different materials for each. These swords are also very compatible with our crafting system and pieces, making this set for a great second place!

And for this contest’s first spot, we have the Royal Armoury Set, made by MajorRoyMcCalluster. It consists of a two handed polearm, a spear, a dagger and a one handed mace. 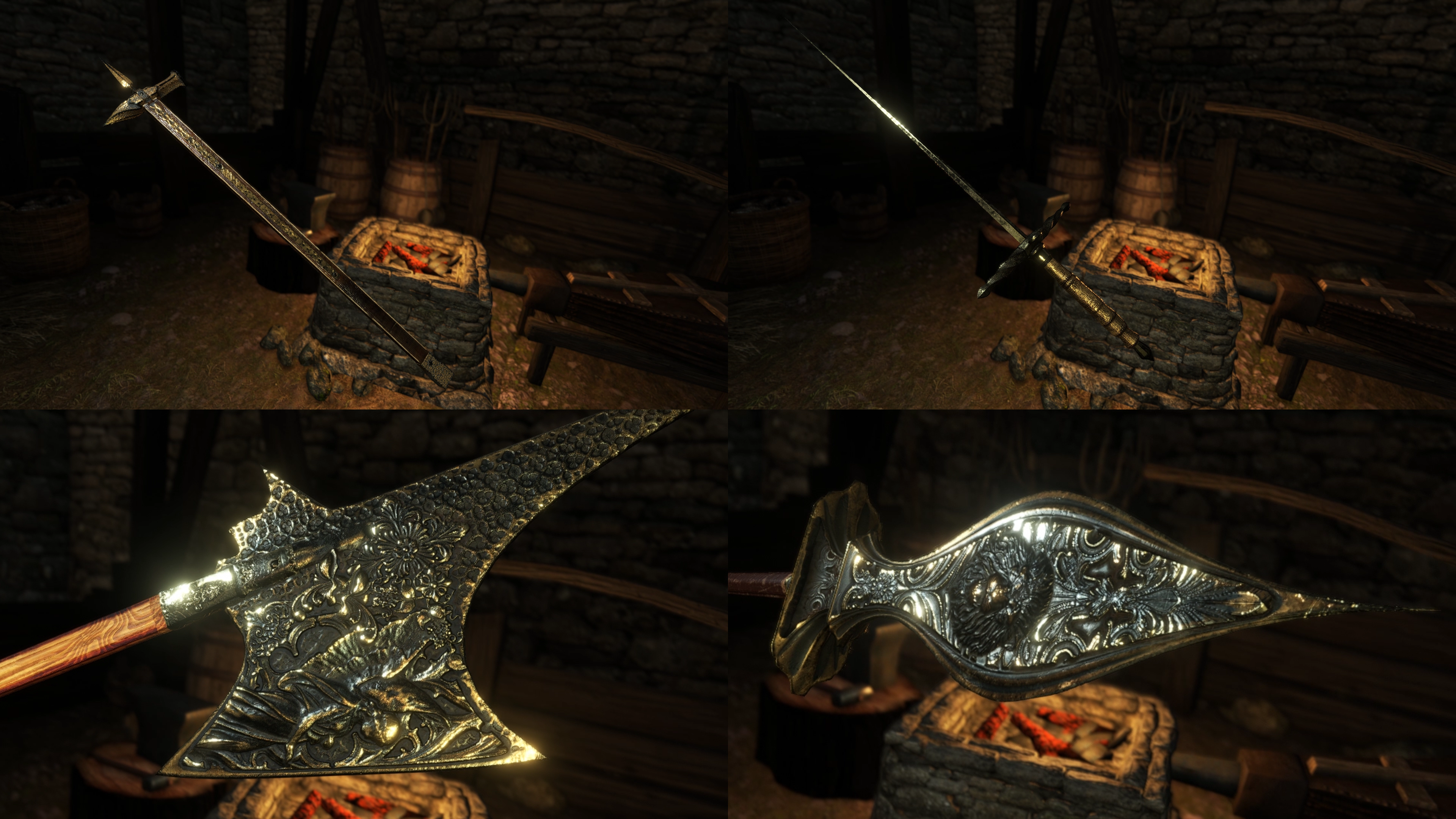 The attention to detail displayed in this submission was awesome to observe. The intricate engravings present on most weapon parts, combined with some golden colour give a profound regal feeling and would make any noble pick these up at the blacksmith!

The topology, sensible usage of polygons and the beautifully baked textures all stood out to us when evaluating the set. Overall, a very well-rounded submission that hit the bullseye in staying compatible with the theme of the contest.

You can again check out all of the submissions in detail on our forums as well as download the weapons and use them in your game.

Finally, we challenged artists to create a short comic set in the Dark Ages of Calradia. We would certainly like to thank them for the giggles that followed these entries and congratulate them on the awesome art! 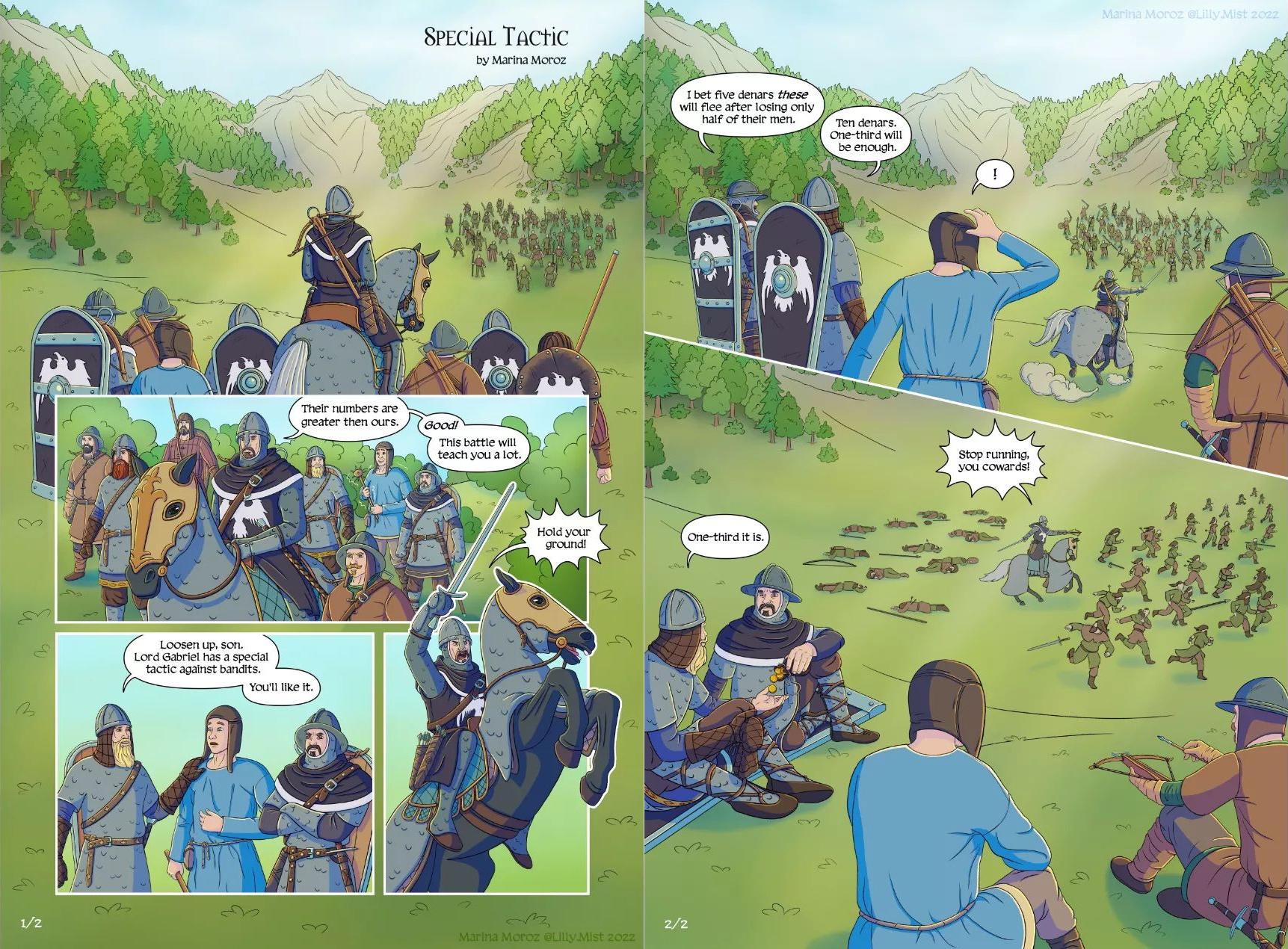 We’ll be reaching out to all of the winners to arrange the delivery of your well-earned goodies so please make sure to stay available in the following days! Thank you to our friends at Intel for providing the prizes! 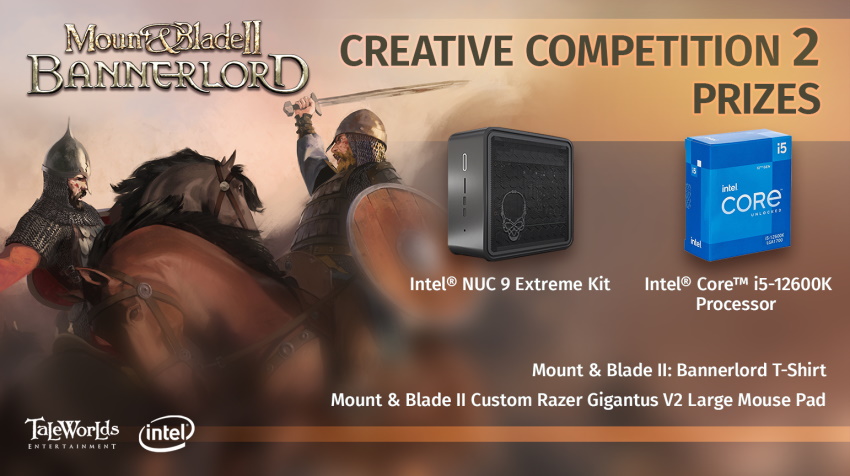 Our appreciation goes to everyone that participated in the contest and we feel blessed to have such a dedicated modding community. We look forward to exploring similar competitions with you in the future!
Click to expand...

Y'all gonna still reach out to the winners?

Super Jew said:
Y'all gonna still reach out to the winners?
Click to expand...

Have you not received a message on social media?

Dejan said:
Have you not received a message on social media?
Click to expand...

I have not
You must log in or register to reply here.