I feel your poll options are too polarized. I'm more in the middle, I'll try to be concise in my concerns.
I've enjoyed playing Bannerlord EA and I have optimism for the final version, but it has been frustrating and concerning too.
1: Basic EA game is much rougher and untested then I would have ever guessed based on demos and steam page.
2: Performance was horrible on the system I thought should run it fine based on MP beta and steam recommendations. After upgrades to ram and SSD (and many patches) it runs fine, but that's much more RAM then was recommended. It worries me for the CRPG and strategy game players overall as they often do not have powerful PCs, as they are not needed for these genres, of which M&B is a hybrid.
3: Updates have been all over the places and introduce new problems and make me concerned about the over all strategy of improving and finishing the game.
Fixes to bugs and crashes are fine, but fixes to gameplay seem to often ignore or misunderstand the actual problem and often just create a different problem.
4: Some problems that have been complained about since the MP beta still exist and seem entirely ignored. 1 and 2 handed weapons don't swing in a useful angle on horseback. Cavalry doesn't know how to fight. Infantry doesn't know how to block arrows with shields. There's a lot more but these are the most concerning because they were immediately noticed by so many people and it's been a long time now with little or no improvement. I don't think I've ever seen a Dev comment on the swings of 1 and 2 handed weapons from horseback.
5: It's unclear if the end goal is just an ironed and polished version of what we have, or if they're going to make meaningful improvements to the M&B genre.
I really want more player agency and more meaningful, useful relations and interactions with Lords, notables and others...... but so far it seems such a struggle to get even the most basic functions working that I don't know if that's gonna happen.

Game still has a way to go to improve, but I'm still optimistic.

Worst case, we get some more mod tools I think the player base will carry this over the line for me.

COOMER said:
2 months in and I'm still waiting for perks to actually work.
That and getting Muted on the forum for a month for criticizing the white knights here. 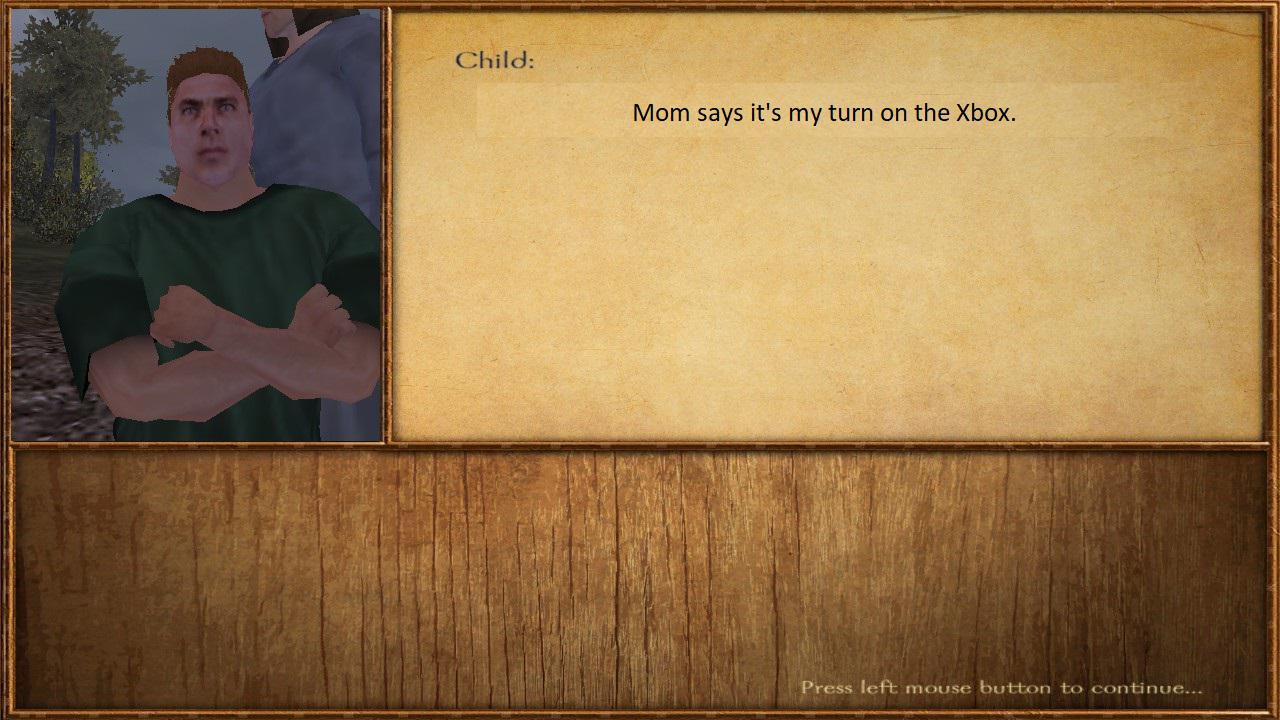 made me laugh a lot

I can say this, I liked kingdom come deliverance, who is also made by a small studio, 100× better than bannerlord. I was recommended to this game but personally wont recommend it. Its 2020 and every npc in the game feels like the exact same character- No personality just a scripted model to stand in place and maybe say 10 words in a decade old ui dialogue. Game is worth $10-$15 in current form, which is still too high in my opinion.
Last edited: May 24, 2020

Viking Conquest kills this BL despite its dated graphics. NPC's are so forgettable.

They had made tens of millions eur and can afford a relatively sizable team of developers.

The state of EA and disappointing speed of patches (which introduce new bugs each time lol) are a disgrace.

They certainly arent a major studio. Warband came out over a decade ago. Im guessing TaleWorlds was quickly running dry on capital and having difficulty obtaining more with the state of this game after 10 years. (Would you loan them millions at this point? I would have six years ago, but i do expect a return at some point.) Hence, i feel this game was released to fund operations due to financial difficulties.

There has been a huge list of things that need done or should be done better but when its all said and done i have played hundreds of hours in this broken game already and have really enjoyed them. Even if i did not get anymore out of it I've had pretty good value for the money.

Battles are pretty lacklustre, I feel Warband had better mechanics actually. Aside from that, things feel weird, being a mercenary if I help a lord in a siege or battle I lose most my men and gain 90 gold? come on that's just lazy coding, helping in small battle/siege should be 90 gold and it should scale, then a lord should COMMAND you to help them in a siege/battle, who wants to lose most their hard earned men for no reason other than petty pay. Anyway hi guys haven't used this forum since 2014!

Teslanbenz said:
I can say this, I liked kingdom come deliverance, who is also made by a small studio, 100× better than bannerlord. I was recommended to this game but personally wont recommend it. Its 2020 and every npc in the game feels like the exact same character- No personality just a scripted model to stand in place and maybe say 10 words in a decade old ui dialogue. Game is worth $10-$15 in current form, which is still too high in my opinion.
Click to expand...

I hated KCD right after it launched myself. From what I have read though updates have fixed many of the issues it had at launch so perhaps I should give it another try. That is kind of how I feel about Bannerlord, it's definitely not great right now but I am hopeful that it will get better.

They said game is gonna be in EA for around one year, 2 months have passed and I can barely see the difference. Just some minor staff has changed. Already losing hope for the game, very disappointing stuff.

In case it needs to be said again, this is definitely good enough by COVID standards.
Especially on the engine side.
Hopefully gameplay development will pick up after everyone gets back to the office.

The sad truth might be this: people not satisfied with the game simply quit and faded away. So the poll would most likely return with a much more positive result than reality.

Believe that this statement comes from somebody with minimal background on software development.

eddiemccandless said:
I hated KCD right after it launched myself. From what I have read though updates have fixed many of the issues it had at launch so perhaps I should give it another try. That is kind of how I feel about Bannerlord, it's definitely not great right now but I am hopeful that it will get better.
Click to expand...

Yea, they really dropped the ball on release. I would definitely recommend giving it another shot. Its too bad they released the mod kit so late after release as most players had moved on. Kcd could have been a masterpiece with the right modders supporting it.

the combat is great, if they can unbreak the campaign AI, diplomacy, and make marriage matter then I think it will be a great game. as is it is a good time killer but does lack depth

I would say none of the above after more than 300 hours and right after my longest playthrough. The performance on my pc is really good in 1.4.1 and I really like the graphics, character creation, troop trees, world map, armor, weapons, battle scenes etc. On the other side the gameplay is so frustrating and most of it feels as it got implemented one week ago. The whole war mechanic is a complete disaster, totally irrational but it seems the war/peace declarations follow the same order every time. Defections are even worse, leading to one or two factions destroyed very early on, one lord wanted 6 million denars to join me (wtf?), lords that didn`t have a fief in their former kingdom defect to the enemy after one week with the fief you gave them like total whores. The conversation system is totally based on luck/reloading 10 times untill you finally get your wife.

I really hope war declarations, defections and conversation is getting fixed during the next two weeks. I would even suggest to remove defections and instead make it possible to have companions and their families (let them marry and have many babies) as lords. These are the priorities in my opinion, because they make every playthrough extremely frustrating.

Watergun said:
Believe that this statement comes from somebody with minimal background on software development.
Click to expand...

Well no sh1t buddy, I'm an average player not a programmer ffs. From my perspective nothing big changed, pretty much the same game as 2 months ago.

Niewitch1 said:
What was asked, what bannerlord is right now, not future. There is less missions, diplomacy aint working and many aspect you mention aint finished yet. And some you mention is updated mechanics not entirely new. And is viking conquest categorized as mod, or is it a predecessor, or is it payd dlc, it is standalone game so yes it is predecessor and only thing we ever should compare to, as its newest before bannerlord and it have way more, lets say again WAY MORE content. Those content have been live long time before bannerlord was even heard, its bit funny that new game have way less content than predecessor developer still advertize strongly. You know warband you compare it, aint even first game in franchise. Yes aswer is not even close satisfied.
Click to expand...

Viking Conquest was unplayable for many years. It wasn't developed by Taleworlds anyway as far as I know.

Kentucky James VII said:
Indie does technically mean independently published, but in practice most people use it to mean "low budget small team game", which Bannerlord is not. There are some AAA games produced by teams smaller than taleworlds, which sell fewer games, and make less money.
Click to expand...

It's irrelevant how some people chose to define a word. If someone tells me I am not allowed to call Taleworlds an independent developer he doesn't become right just because he chooses to use an incorrect interpretation.

While the updates are quick, there is little attention seemingly placed on late game.

Aside from the issues with diplomacy, what keeps the player engaged after they're the most powerful? They can just fiddle their thumbs and go smithing while their vassals clean up. I'm on my 13th run right now, and I've never played through to the end of the game. Perhaps it's just me, but once I'm stronger than the rest, the lack of challenge and rewards leads me to start a new run instead of seeing it through.