Additional Requests for the Slice of Life.

(Yes, this is a copy and paste of the one I placed in the SP Suggestions.)


OG Thread: I know I'm late to the party (this forum) but over my hundreds of hours of Bannerlord (thousand + in M&B in total), I cannot stress it that aside from a needed additions of the political and kingdom system, I would like to point out and request 3 specifics that should be added.

1: Character/Faction Biography Edit - It's a minor request of the quality of life in this game but I can guarantee that a solid slice of the Bannerlord community give their character a bit of backstories, some people probably write their stories in Microsoft Word and the cooler people definitely just like to commission an art but I must say that it would fantastic if Taleworlds could merely seal that in by giving us the choice to edit our biography texts (see above Info tab) and I mean at good length (not a cheap word amount). And I don't just mean our character but also Family Members, Companions, and also our own custom Kingdom (maybe the Lord's too?). At least to just say, a bio is a good start for more.

This way we don't have to wait and rely on the elusive traits to make an skimpy and appalling bio to our character but rather something with life! 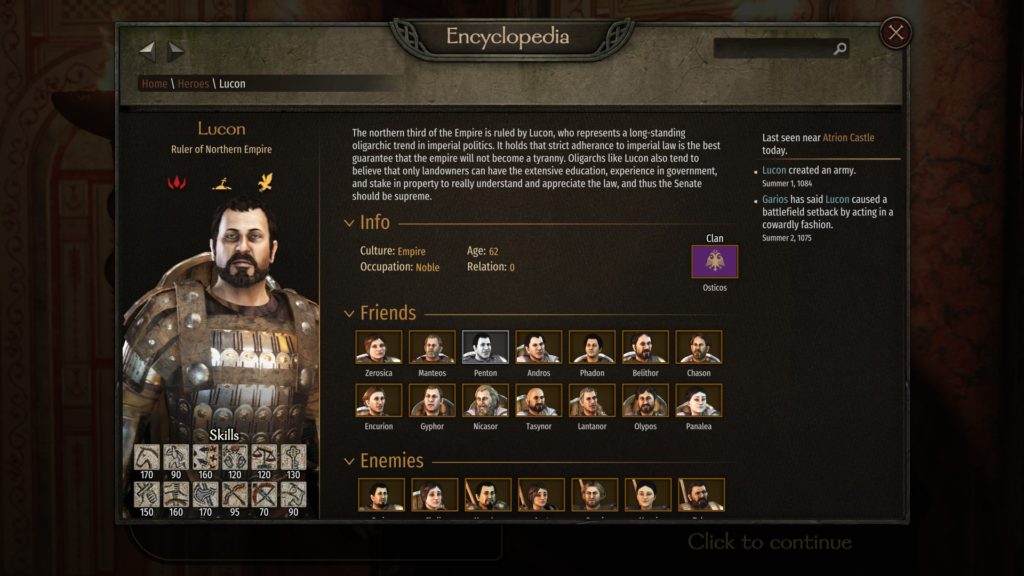 2: ADOPTION - I can bet you all the gold in my character's inventory (which currently ranges to a few million) and my custom 300 - 1100 dmg glaive (Levity) the flat majority of any Bannerlord player has either requested, mentioned or even dreamt of adoption; this coupled with every player's lack of children until their 40s and the long wait of having to raise the children to fighting age - Point being, it would be fantastic to add adoption, at least start with adopting companions, as I have a couple of young candidates that I had the honor of tutoring and watching fall unconscious in battle meanwhile I win it with only sliver of health.

I would like to see my clan blossom into a large clan healthy and ripe for future nepotism in my custom kingdom I intend on inheriting (currently am bound to inherit the Northern Empire because I pitied them 2 in-game years ago and joined). But it doesn't have to just be companions adopted into children but a possible field of adopting siblings (at a penalty of upsetting existing siblings or adopting as children while upsetting other adult children).

Note: My character is like in his 40s and would never adopt this thing as a child. This is one system I can guarantee many want to see as it would greatly expand their clans (add a limit if you must, at least allow 2 adoptions) and make them fief-granting to making lords and the marrying family members to gain more mechanic much more fruitful.


3: Expanded Kingdom Rank System - Aside from every request that entails a greatly expanded kingdom system (which I fully support because I love politics and kingdom management), a kingdom needs ranks aside from 2 ranks: The King & Generals (because ladies in waiting and children don't count. The only technical rank is the Marshal but that's not a rank but an ability given to lords to summon armies.

Let's separate the Lords from the even more powerful lords by granting ranks, truly giving certain clans more influence or perks depending on the job (i.e the rank of a court strategist, marshal, chancellor, cavalry commander, bodyguard captain, or even a freaking Duke). A possible solution as to creating a hierarchy suitable to the historicity of the middle ages and a hierarchy system worthy of a custom kingdom and it's much needed overhaul of politics and management.

Now before you nitpick and possible destroy my confidence and essentially my will to mount and blade things; just know I am a humble player making my way across Calradia. Do consider these as a start.
You must log in or register to reply here.

How to fix the warlike behavior of the AI.

We are in urgent need of hierarchical delegation of tasks and long distance management.