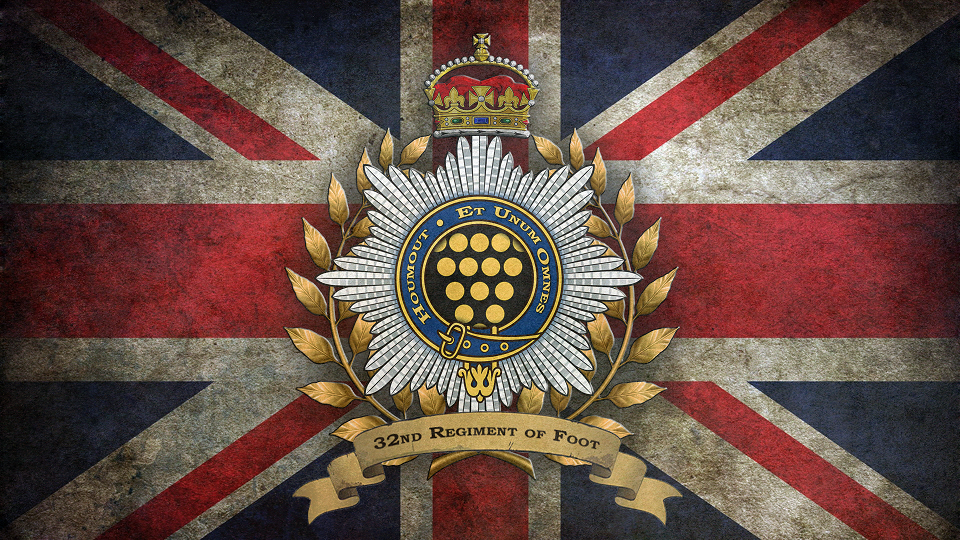 The 32nd Regiment of Foot sets out to accurately represent the soldiers of the British army during the closing days of the Peninsula war
and the Waterloo campaign. Our main goal is to closely reenact the formations, command structure and discipline of the British army.
While other clans may focus on, and therefore for best us, in combat skills alone none will stand more disciplined nor better trained in the
ranks than a soldier of the 32nd Regiment. For our goal is not only to fight and win, it is to fight with the full respect for the drills and
tactics of the period. If you are looking for a realistic line regiment that is reknown for its structure, organisation, discipline and gallantry
then the 32nd might be the place for you. Bearing the tags of the 32nd means that you are part of a well known and respected community
with over 10 years of experience. Members of this regiment can proudly say :"I am a soldier in the 32nd!"

Over the years we have expanded to include a light company, an artillery detachment and a cavalry troop in addition to the line company. We are
proud to be able to operate as one cohesive unit on the battlefield, displaying skill and coordination as a regiment. 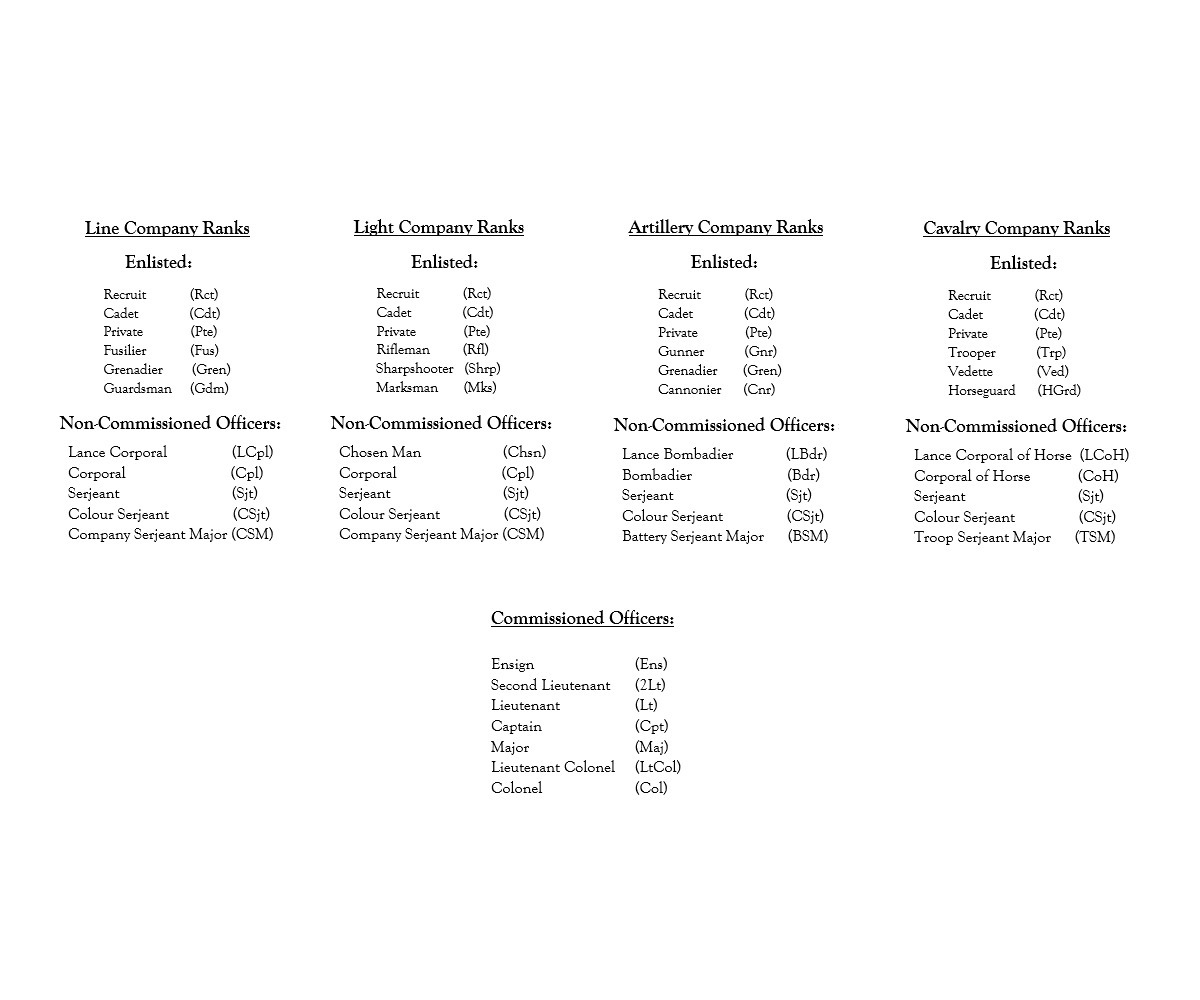 Our training and events always run through the weekend. The times can always be looked up and changes will be announced in advance.
If this does not suffice you can always ask your NCO or CO who will make sure you are up to date with the event times.
these are the Normal Scheduled event times: We are currently recruiting for the 'Mount and Blade: Warband, Napoleonic Wars DLC'.
We are eagerly awaiting the release of Bannerlord and hope that it features a similar DLC and mods
and comes to be the spiritual successor to 'Napoleonic Wars'. If you wish to enlist in the 32nd regiment of foot
please follow the recruitment link and follow the instructions provided.

The 32nd began its existence in 1702 when Colonel Fox raised a regiment of Marines to participate in the war of Spanish succession.
It served under various names as it changed Colonels until it was officially designated the 32nd Regiment of Foot in 1751 (It being the 32nd
most senior line regiment). In 1782 the regiment was affiliated with the county of Cornwall, becoming the 32nd (Cornwall) Regiment of Foot.
This did not mean, however, that the regiment recruited exclusively recruited from Cornwall, like many regiments it recruited from across the
Isles and particularly heavily from Ireland.

The 32nd was stationed in the West Indies in 1796 to assist in the crushing of the French slave revolt and protect British interests in the region.
The regiment suffered heavily from the climate losing almost all of its officers and men in the years it was stationed there. It returned to Ireland
in 1800 and was brought back to full strength of 1000 rank and file by 1802. A second battalion was formed in 1804. The regiment was almost
sent on a South American expedition in 1805 but instead spent the next two years garrisoning Ireland. 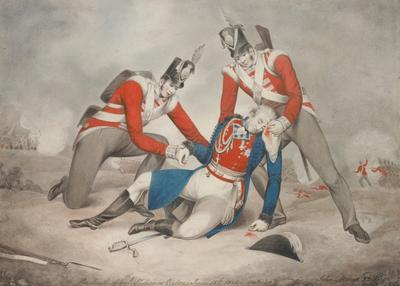 The death of Sir Thomas Picton at Waterloo​

The regiment was deployed overseas in 1807 in the British invasion of Denmark. It would then see service in the garrison in Gibraltar before
redeploying to Lisbon. They fought and Rolica, Vimiero and Corunna. The 32nd was then brought back up to strength and deployed on the
Walcheren expedition in 1809 where they suffered heavily from disease. After, again, returning home and being brought back up to strength
it was redeployed to the peninsula in 1811, receiving a draft from the 2nd Battalion whilst in Lisbon.

The 32nd would go on to participate in in the battles of the peninsula and served with distinction at Salamanca and the many battles in the
Pyrenees, including Orthes, Nivelle and Nive. The 2nd Battalion was disbanded in 1814. The regiment was one of the many deployed in the
Waterloo campaign. Fighting at Quatre Bras and suffering considerable casualties. The regiment then fought the next day at Waterloo as part
of the Anglo-Allied forces deployed next to La Haye Sainte. The 32nd would suffer considerable casualties. With only 131 men left fit for duty
at the end of the 18th June. The body of Lieutenant General Picton was also carried from the field by two men from the 32nd Grenadier
Company. The regiment would continue to serve until it was amalgamated with the 46th foot, forming the first Battalion of 'The Duke of
Cornwall's Light Infantry', in 1881.


"One and All!"
Motto of the 32nd Foot and the County of Cornwall

Best of Luck in the new DLC Lance

Good luck lance my brave lil Marine! May the DLC bring joy to you and yer regiment!

Goodluck in the DLC my Dutch friend

May the ranks of the 32nd continue to stay strong in the DLC! My Favourite fellow British Regiment!

Aww your so sweet stewart I wish the same to you.

I already gave my good luck to you but i'll do it again so good luck  .

Why thank you Volonski lad and teaman

I hope to see all of these fine Gentlemen on the new DLC....

I look forward to seeing all these fine soldiers on the field in the upcoming DLC!

Nice we brought in 4 new recruits in like 2 days good work guys!

Here's to hoping they stick around
You must log in or register to reply here.