Relevant to the debate on fascism. He specifically talks about the difference between nationalism and fascism which is basically what the last few observations that were made on this thread were about.

eddiemccandless said:
I also think that he is way more dangerous than you think because he has paved the way for someone else, potentially more competent (kind of difficult to be less competent) to push the same rhetoric in the future. I am also worried about how divisive the political discourse is these days, although I suppose that might be as much a product of the issues that this country has than of Trump himself.
Click to expand...

This is a possibility, yes. I think 2016 Trump tapped into two separate demands in the American society that had been mostly unmet:
1) change for change's sake stemming from the neoliberal fatigue
2) people who are, broadly speaking, socially conservative and fiscally liberal.
He promptly betrayed both , but someone else might be able to tap into it more skillfully and sincerely and therefore more successfully. They are legitimate demands and don't inherently pose any danger, but they can go off the rails and it would become ugly.
______________________

I was addressing the Bund because that's what the photo Monty posted was (afaik). The slogan America First specifically in the context of interwar America was just an isolationist slogan pertaining to foreign policy. It didn't address domestic policy at all. Even the wiki article Jacob posted says

"the committee principally supported isolationism for its own sake, but many communists made use of the AFC as well as antisemitic and pro-fascist speakers who became its leaders"

It was a catch-all platform for everyone and anyone who opposed going to war. I am sure there were *some* legitimate fascists in America at that time too, but they were not a relevant force. Equating American interwar isolationism with fascism is just absurd. And as the very same article says, the organization, including Lindbergh chose to disband immediately after Pearl Harbor and promptly supported the war effort. It was not some Nazi or fascist fifth column.

Why make it into a slogan? Exactly because it vague, so that people can read into it anything they want. Many, if not all, successful political slogans were vague - Reagan's and Trump's MAGA, Obama's Hope and Change, LBJ's Great Society, BLM, or what have you. Them being impossible to disagree with at face value is the point.

I'm sure lots of traitors from coast to coast confessed a newfound patriotism once the arrests started on Dec. 8.

I mean I think there's a lot one can disagree with when it comes to MAGA. To begin with, it implies that there was some past golden age in the US which I do not believe is accurate.

I get what you mean, but I think it exploits the general rose-tinted glasses through which people of any generation tend to see the era of their childhood, adolescence and early adulthood. Food was better, sex was better, grass was greener, sun shined more sunnily etc etc. rather than omg let's re-segregate the lesser races and so forth.

But yes, it's the least rorschach-y out of those I mentioned.

kurczak said:
I get what you mean, but I think it exploits the general rose-tinted glasses through which people of any generation tend to see the era of their childhood, adolescence and early adulthood. Food was better, sex was better, grass was greener, sun shined more sunnily etc etc. rather than omg let's re-segregate the lesser races and so forth.

But yes, it's the least rorschach-y out of those I mentioned.

I'm just curious. How many years have you lived in or near rural South Carolina?

I freely admit that none. 3 weeks in Tennessee and 4 days in New Orleans is my most Southern personal experience. I loved it, though, except the humidity. If you tell me there is a relevant number ( as in, say, at least 3% of the total registered vote) of people in the South who want to bring back segregation, that they want to overturn Brown v BoE and/or Loving v Virginia, I will take your word for it for the time being. Is that what you're saying?

I did talk to a number of 2016 Trump voters from New England/Mid-Atlantic, some were traditional upper (middle) class Republicans in their sheltered snowcone subrubs, some were "trying to make it happen" in NYC, some drove night hours for Uber so that they didn't get evicted. Most were white, some non-white and even one, solitary, but verified black. However, none of them stroke me as an incarnation of Storm Thurmond or George Wallace. Also, the only openly Trump voters I met in my very own Brooklyn were (ultra?)orthodox Jews.

Inappropriate language
I spent 6 years in Columbia, SC but that was relatively sheltered since people in urban areas generally don't share attitudes or beliefs of the rural surroundings. But 26 years just outside suburban Columbia left an indelible impression. The white people who predominate in the rural setting are little removed from the American Revolution. They love their moonshine and they hates their *bruh*. It's a generational hate, passed down from father to son. Early in the history of the republic they tended to vote Republican, just like the lord who lived in the big house. But a funny thing happened, a war based on state's rights and the desire for a limited federal government. Before the war ended Republican President Lincoln very slyly pushed through Amendment 14, which freed all slaves in areas currently in rebellion against the US government, which means zero. When the Confederacy surrendered well, then it applied. By the time of election in1868 virtually all the white people in the South voted for Democratic candidates out of spite. It continued like this for a hundred years, some serious hate. Until 1964 and 65 when a Democratic, his family doubtless switched to Democrat in 1868, Texan president pushed through voting rights act to ensure blacks had the right to vote. Yep, led to whites switching back to Republican party. by 1968 out of spite. More serious hate.
Last edited by a moderator: Nov 28, 2020

You just had to say it?

Vermillion_Hawk said:
You just had to say it?
Click to expand...

Does the truth bother you?

true it may be, but you know which words not to use, silly

But wait, how could Brutus be racially insensitive? He elected Podunk, NC's first black sheriff after all.

My take:
Not fascist, very openly and definitely unacceptably racist, a lot of authoritarian signs. But I can't pinpoint any gravely authoritarian policy because other American institutions were still quite powerful in his first term so he wasn't able to do much.

Fascism isn't putting your country first. Any politician of any ideological flavor puts his country first, unless he is corrupt or a traitor. It is almost a tautology.
Click to expand...

And I will unapologetically refuse this. I will not say that putting country first is fascist, but adopting a universalist outlook should not be vilified either. 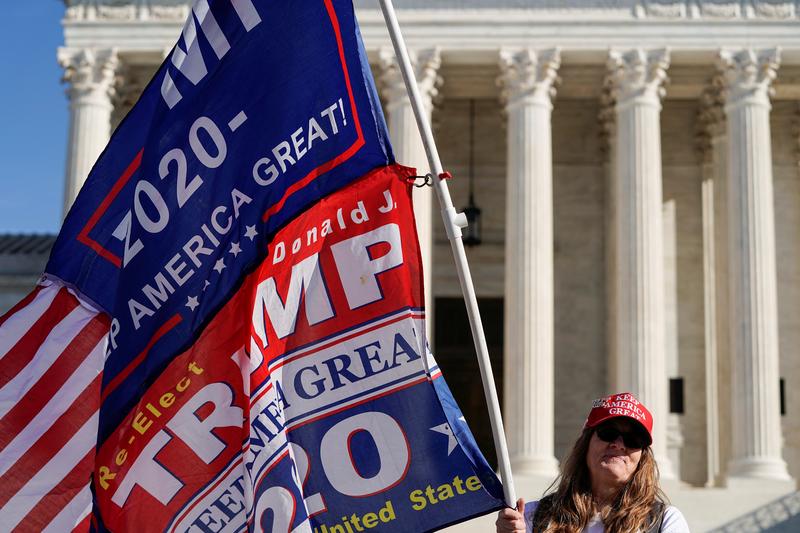 The U.S. Supreme Court on Friday rejected a long-shot lawsuit by Texas and backed by President Donald Trump seeking to throw out voting results in four states, dealing him a likely fatal blow in his quest to undo his election loss to President-elect Joe Biden.

www.reuters.com
It sounds like the whole lawsuit was based on some bogus statistical analysis that Biden couldn't possible have gotten that many votes.
It's getting more and more desperate and pathetic. Hopefully this was the last attempt to waste the court's time.

Fun fact: On the right hand of the screen, I was suggested to follow Biden's page.

So, here's Trump's take on the ongoing cyber attack against the US government agencies. Although the attacks are almost unanimously blamed on Russia, he somehow finds a way to twist the story to make it look like Biden is China's man (Communism, you know ).

He doesn't bring arguments, let alone evidence. He just talks like an peevish adolescent. It's not interesting.


The Cyber Hack is far greater in the Fake News Media than in actuality. I have been fully briefed and everything is well under control. Russia, Russia, Russia is the priority chant when anything happens because Lamestream is, for mostly financial reasons, petrified of….

Even the Fascist NY Post has turned on Trump/

We’re one week away from an enormously important moment for the next four years of our country.

On Jan. 5, two runoff races in Georgia will determine which party will control the Senate — whether Joe Biden will have a rubber stamp or a much-needed check on his agenda.

Unfortunately, you’re obsessed with the next day, Jan. 6, when Congress will, in a pro forma action, certify the Electoral College vote. You have tweeted that, as long as Republicans have “courage,” they can overturn the results and give you four more years in office.

In other words, you’re cheering for an undemocratic coup.

You had every right to investigate the election. But let’s be clear: Those efforts have found nothing. To take just two examples: Your campaign paid $3 million for a recount in two Wisconsin counties, and you lost by 87 more votes. Georgia did two recounts of the state, each time affirming Biden’s win. These ballots were counted by hand, which alone debunks the claims of a Venezuelan vote-manipulating Kraken conspiracy.

Sidney Powell is a crazy person. Michael Flynn suggesting martial law is tantamount to treason. It is shameful." 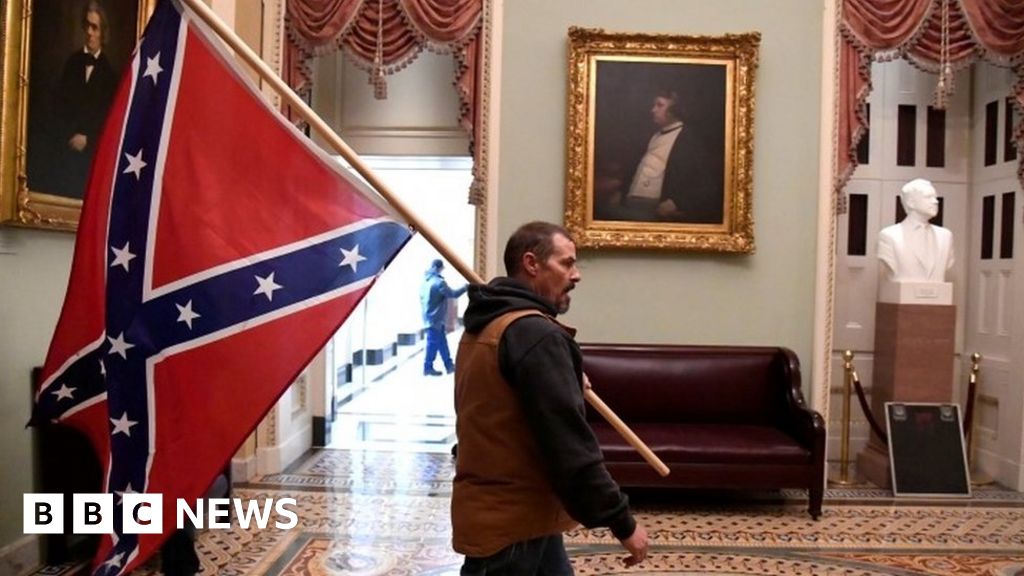 US Congress in turmoil as violent Trump supporters breach building

"The attack on the Capitol is not a protest, it's an insurrection," - Biden
Click to expand...