Since beta 1.5.7 there is often a new invisible party speed penalty. It happens after battles or recruitments. It has nothing to do with disorganisation and last a few in-game hours longer. No line about it in the speed tooltip. This penalty seems to disappear randomly. Lost speed can be more than 1 point.
Quite annoying when chasing brigands.

I upload a save right now

In case the additional information helps:
I managed to reproduce this (non-beta e1.5.7) by joining a sieging army, then breaking off immediately.
A "Disorganized" party speed penalty is added after breaking off. The penalty is removed from the party speed list after a while, but the party speed total remains the same, as if the "Disorganized" penalty was still being applied. It's not just a visual bug, as the speed on the map is also slower than it should be.

The math doesn't add up. A hidden -1.42 disorganized penalty is still there according to the total speed: 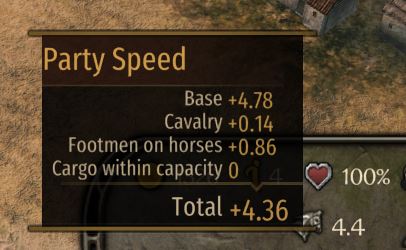 I've been informed that this bug is fixed and will be sent to the live or beta branch in the next updates. Thanks for reporting and sorry for any inconvenience!

By coincidence I come up this bug and it seems it still exists. Fixing now. Currently if you do not buy item or troop your speed will be 30% less after map events.

Then I thank you for digging up cold cases.

gronaz said:
Then I thank you for digging up cold cases.
Click to expand...

Actually by coincidance today I see this bug then I surprised because it is something big and wondered if anybody noticed this then made a forum search and see this post. Thanks for reporting it. In 1.5.7 / 1.5.8 probably if you try this you will notice you do not lose disorganized penalty even after hours past. After some time pass you see your speed without disorganized penalty at right bottom corner but if you open tooltip by mouse overing your party you will see still disorganized penalty is applied (two shown speed values are different) and you are slow (until you buy something from market or disband item or recruit troop or heal troop)

Looks good now.
I saw that it went the opposite way after the initial fix in, namely that the disorganized penalty didn't actually get applied, even though it was there in the speed calculation list. But that seems to have been resolved as well now.
I haven't seen any speed miscalculations in the past few days.

Resolved All my caravans disappeared in 1.5.8