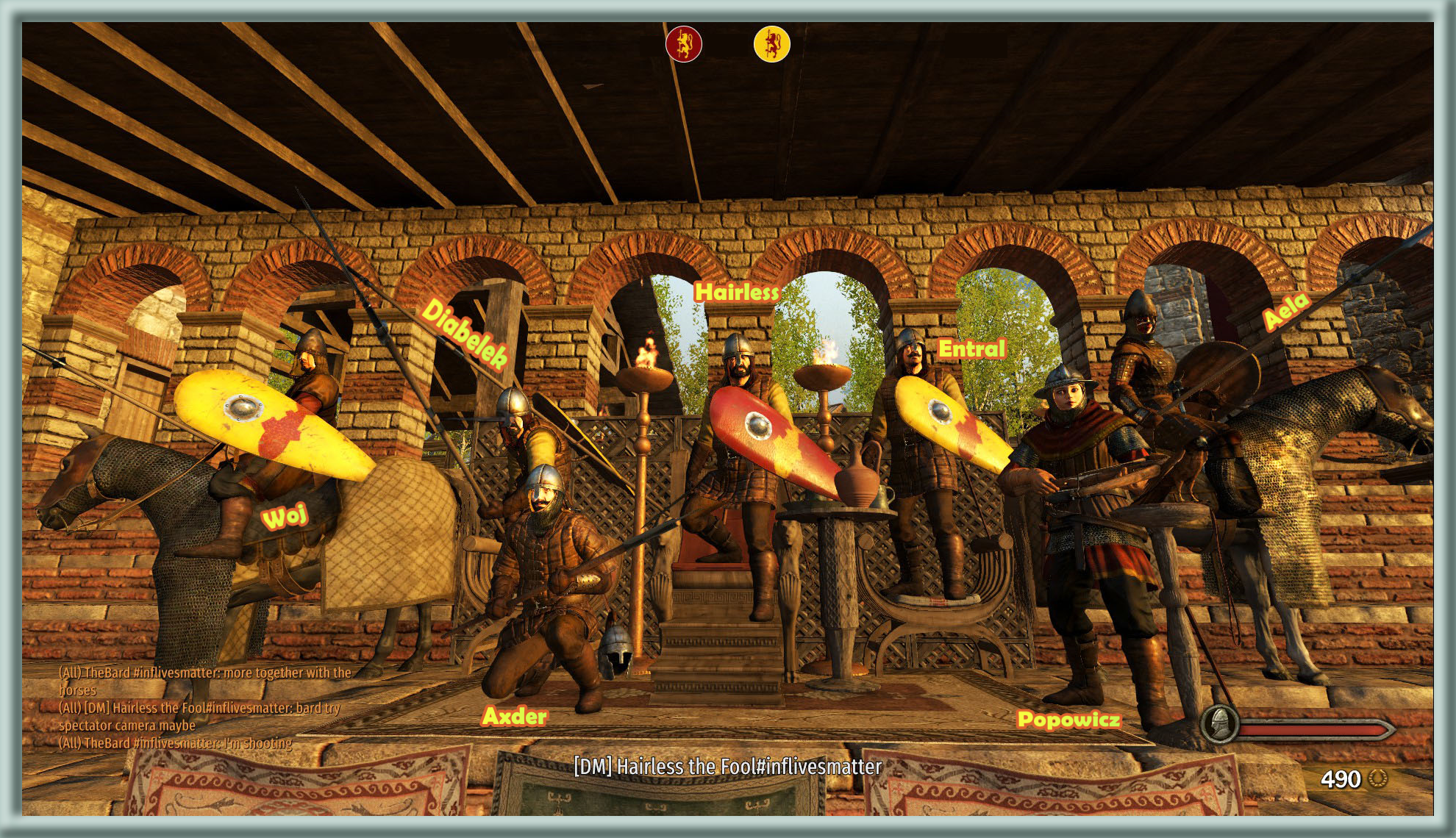 MnBComp talked with the leaders of the two teams in the final for BEAST3. Back in the beginning of Beta, Diabełek as the one who had placed foundations under what we now call Destiny Masters. After half a year of clan being nameless, only under tag DM, and 4 leaders(Diabełek,Entral,Sebebar,Mlunba) wind of change came along. Hairless took over, gave clan a name matching already used tag and forced every member to use tarot card as their title. Our first squad had known each other more or less from Warband, but it was rather short interactions. For example: Hairless, Diabełek, Entral and Sebebar had known each other from mercenaries clan named Masters. ​

Risen Manifest firstly established by Koso and Horac in 2017 with a Yenilmezler clan tag in Warband to have a main goal win all tournaments which we joined and we did. After we won couple tournaments in Warband we decided to leave the game because it was nearly dead for us. When Bannerlord was released for Early Access, Koso and Relexan decided to re-open "Yenilmezler" with Koso's big insist.​
​
We gathered our real close friends who play good and experienced in this game. Koso also invited Jufasto to the clan who is Koso’s friend since 2011 and has a great deal of Warband experience. Koso, Relexan and Jufasto were leading clanwars at the same time at the beginning of our cw history but it was creating little conflicts and too much orders going around so we decided Jufasto for being IGL of clan wars.​
​
Jufasto started leading clanwars alone and posting them on Youtube. We changed our Yenilmezler Turkish clan tag to Risen Manifest one. This was the first step of being an international clan for RM. We were whole Turkish team except Aiku at the beginning. Aiku was also our really close friend and the matches he participated was ruled as English (Even tho we had 5 Turkish 1 British at that moment. This was the second step of being an international clan for RM). After that our other close Turkish friends decided to quit this game we decided to gather some new members to our family.​
​
Our third step of being an international clan after Aiku was to get Pacemaker for BEAST1. Even though he just joined us for one tournament only, after BEAST 1, he loved us so much and we had great friendship with each other he decided to stay in clan. 1 week after Pacemaker joined the clan David Pumpkins joined as well.​
​
We played BEAST 1 and managed to become finalists. After BEAST1 Aprikosenmann and Keykubat joined the clan. Apri played so actively and spent time with clanwar organisations so much. As leaders (Koso, Relexan, Jufasto) we decided to make him our 4th leader. After losing BEAST 1 Final and becoming second place in there we took a small break until BEAST 2.​
​
In BEAST 2’s first week we had an extra ordinary situation. It was RM vs DM from first week of the second tournament. We played and we won the first week against them. It was the first official tournament match DM lost in DM’s clan war history. We continued becoming 1st place at the Division A and had match with DM again we drew against them and eventually that led to the RM vs DM final once again. Due to the extreme reasons, our players being in-active before 2 weeks of final RM played really poorly on the final and became second place again.​
​
After BEAST 2, Jufasto’s really old friend Varadin from cRPG and Merc mod joined the main roster by Jufasto’s invite. We participated the Second European Duel Tournament and RM members got TOP 3 places. We are really proud of our duelists.​
​
Now we are playing BEAST 3, once again we managed to do perfect with our matches in Division A and becoming the finalists again. As I mentioned before, our ambition is to win every tournament we have participated. Therefore, we are planning to winning. We are really lucky to have such a professional players, great friendships and enjoyable moments together.​

Hairless - small eyes, big brain. Formed DM into what it is now thanks to his strong leadership abilities and charisma. Main IGL and infantry of the first squad.​
​
Diabełek - Polish highlander, speaks multiple languages, doesn't drink much but whenever he does he goes all in. Also BEST spearman in the game.​
​
Entral - polish legionary, his love to Rome is as big as his love to Bannerlord. Shy on matches, but talkative outside them. Is able to tell the same story 20 different ways without having a grin on his face. Ah yes, very strong shielder(very!!!).​
​
Popowicz - BIG fan of polish cuisine, polyak who lives one step away from Ukraine. Peaceful soul and really likeable. Natural born archer, shoots cav from trading post A to C with eyes closed.​
​
Woj - chad in the game, chad irl. Mix of vodka and baguette, but mostly polak. His super power is riding his pony, so beware.​
​
AXDER - literal Polish magnate, once fell over a gold bar during video conversation. Random who came over from NW to be the best 2hand abuser in the game. also chad​
​
Aela - w 0 m a n(Polish), has an army of simps, never says sorry. Very strong cav.​
​
Sebebar - Polish stereotype, drinks much then disappears. Even during his absence he is still in our hearts. Recently came back and is ready to rumble. ​

Risen Manifest - Golden Team​
​
Jufasto -> EASY CLUTCH 1vs6? IGL of RM, 300 iq strategist. Main Infantry since 2010.​
​
Koso -> Playing amazingly perfect while having 60 fps + drops. I can’t imagine him 144hz​
​
Relexan -> Best cavalry of Bannerlord, superior player. Competitive and strong.​
​
Aiku -> Cute, shy, anime boy. Robot aim, k**** autoblock. Ultra nice and kind to everyone c:​
​
Pacemaker -> Half Russian-Half German Chad – Perfection with every classes.​
​
Aprikosenmann -> Competitive Fruit, Duel Tryhard – Extraordinarily Chill always with German Logic and Discipline​
​
Varadin -> Warband Tryhard, very helpful about computers, ambitious to win everything.​
​
Keykubat -> Chill player, enjoys the game. It’s wholesome to chat with him during playing together.​
​
Penthos -> Commando irl, always has ping problems, strong shielder.​
​
Gellert -> Master troll, little chess prodigy, kick slash pro.​
Honorable Members:​
​
David Pumpkins -> Matty boi. “gg bois” Incredibly good against infantry against multiple opponents.​
​
Inspire -> Ghost of RM, discord booster, secretly playing merc mod and destroying Warband plebs.​
​
Ravien -> Studies for university exam always all the time, has a really soothing streamer voice. Good archer of Warband mm. ​
​
IHaTeCookie -> Cannot fight around A flag in Trading Post, he was main RMinfantry once… FPS drops took him from us…​
​
Seno -> MAIN ROLE and STAR of our LOTR meme video. Has such a great personality you want chat with him all the time!​
​
Flescher -> CEO of the richest American Company, we keep him in the clan because he pays us monthly.​
​
Horac -> Ex Warband Leader, number one fan of RM. Our secret weapon against DM!​
​
Aeth -> Always thinks he is best (and he is?) we will never know he stopped playing so long ago.​
​
Randyyy-> My little Randy… he had a popular discord for Bannerlord community, now it’s gone. RIP​

Is this a rhetorical question? Obviously DM will prevail due to our strong family-like bonds and power of friendship. Only thing that helds us back from meeting irl was covid, which is kinda unfortunate. We are the best, and we will prove it third time in a row! ​

RM will be victorious. Reason: We finally got rid of in-activity problems. We still cannot play 7/24 no-life like DM players do but it's still enough for us have victory and be champions of the tournament. ​

Woj. Chad irl, chad in the game. He is always there when needed, maintains high morale for the entire team, carries on horse and can hold himself well on foot. Nothing else to add, he is simply CHAMPION WOJ SUPERIOR. ​

Woj and other DM members are so jealous of Relexan that they stole his "Champion Superior" title. Besides banter, both of the cavalries are the top cavalries of Bannerlord right now but as far as i see Woj was underperforming these days. So it's by far Relexan.​

The most boring tactic that takes any skill away from both teamplay and IGL perspective, also is tedious to play as and aganist. Anyone who enjoys this "crap" tactic is probably the person who comes to the new year's eve party with alcohol-free drinks. Most likely it's going to happen, so all I can say is "bring it on, duel server guardian!". And yes, nothing can beat us, except game crashes ahahhahaha. ​

We are not leaking our tactics before final, you can watch the final and see it live!​

As I am not into fantasy, it's rather hard to answer. But I can guarantee that moment we get beaten, we will return 2 times stronger. Our clan is simply way to close to each other, even if we quitted Bannerlord we would more or less stick together on other games. ​

They will cry so much and uninstall the game so fast! I am kidding The certain situation happened before, when we won a tournament match against DM, they grinded so hard until final. So, when they lose the final, they will just start grinding 7/24 again.​

Cav glitch is a complete bull****, and I still support banning it and punishing people abusing it. But as they say, person with honour is the first one to bite the dust. We won't use it, but moment we spot them doing it at least once we won't hold ourselves back. Also whoever is saying that it's muscle memory, should really reflect on how trash of human being they are to just glitch to gain advantage. It's borderline cheating (: . ​

Woj and Relexan will both use cav glitch since it's not punishable from tournament rules. We spoke with DM and agreed on both sides will use it. It will not be advantage or disadvantage to anyone with both sides abusing it.​

To DM: I always loved the competition between RM and DM. We should have clanwars without tournaments as well. Good luck for the final, may be the better team wins.​
To fans: I don't know if we have any but we would love you guys to always come our discord and play games with us!​
*/~.. Special thanks to: TheBard for suggesting some of the questions.

I think this Final might be the most interesting confrontation of our top dogs which went down so far and reading this interview gave me a realy good laugh and hyped me up for the finals!
Good luck to both of you in the finals and may the better team win.
Last edited: Jan 16, 2021

Very well done prepared page. Thanks for your effort @Aeronwen

Good luck to both teams, this final will be really nice to see and I hope, as spectator, a beautiful and fairplay game

These posts are really fun to read, keep it up

Njördson said:
Good luck to both teams, this final will be really nice to see and I hope, as spectator, a beautiful and fairplay game
Click to expand...

Loyal2Odin said:
These posts are really fun to read, keep it up
Click to expand...

Don't worry it didn't. Even Hairless himself done it but it doesn't matter because we agreed to do it before match.